Relief in sight - a bonus in pay packets 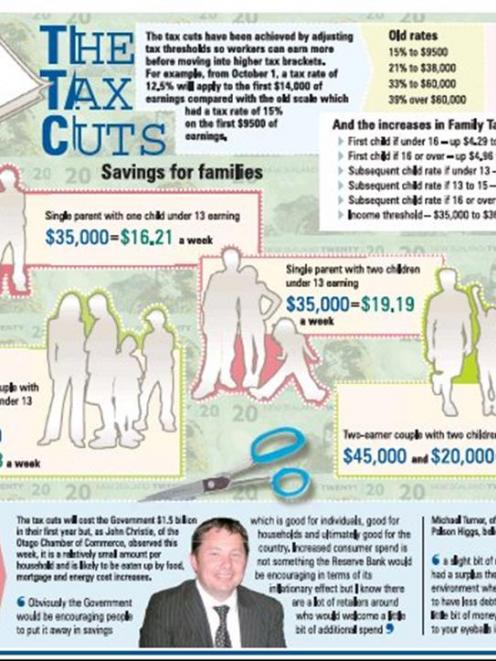 October 1 is traditionally significant for being the opening of the fishing season. But this year, it will be more noteworthy as the day workers begin getting a little extra in their pay packets.

It is more than four months since Finance Minister Michael Cullen announced in his budget that he would be cutting income tax rates.

The move was described by some as help for society's "battlers", by others as too little too late.

Either way, from October 1, the tax masters will adjust their sights to carve off a slightly thinner slice of the pie.

As a result, workers, superannuitants and beneficiaries will be better off by between $11.92 and $28.08 per week.

Accurate figures for individuals can be obtained from the Inland Revenue website - www.ird.govt.nz - where a "PAYE calculator" simplifies the process.

By entering the amount of the weekly insult and tweaking the dates, the extra payout is revealed.

Families with children reap additional benefits because of adjustments to the Working for Families Family Tax Credits system.

Combining both the tax cuts and the credit adjustments means:

• A family earning the average annual household income of $72,000 with two children under 13 will be $43 a week better off.

And, by the way, the connection between the start of the fishing season and the tax cuts seems to go deeper than just their common starting date.

For many lower paid workers the tax cuts will present them with an extra $11.92.

It just so happens that this year a family fishing licence has gone up by $12 to $137, leaving you to ponder about the one that got away.