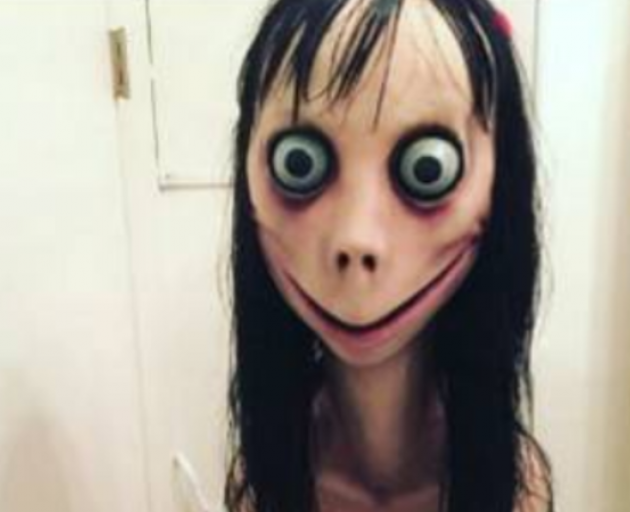 The Momo character which is said to have appeared in YouTube videos. Photo: Supplied via RNZ
An online game said to encourage children to self-harm is likely a hoax, but that hasn't stopped agencies in New Zealand and overseas sounding the alarm.

The game reportedly involves a puppet-like character called Momo that pops up in YouTube videos to scare children and issue disturbing demands.

But despite international warnings, few people can point to evidence it's a real danger.

An image of Momo has appeared in news reports and social media alongside warnings that she is urging children to harm themselves.

She has lank black hair, enlarged dark-ringed eyes and a thin distorted smile stretching from ear to ear.

Netsafe and schools are issuing warnings to parents to be vigilant.

After the girl was questioned, she said she had seen an internet challenge, Ms Varney said.

"She's calm, she's got good friendships, so it was a bit of a telling thing when the picture was drawn and the teacher saw this."

Ms Varney did not want to describe the drawing, but she said it included a face.

She had reason to believe it was Momo, she said.

"Whether it's for real, the fact is these things are out there and they're being talked about," she said.

"Our responsibility is to talk to our children regardless."

For the most part, the image of Momo circulating seems to be the same one, shown over and over again.

Some commentators said it was moral panic fuelled by unverified media reports.

No agencies can produce evidence the challenge exists or if it poses a real risk of harm.

YouTube said it had seen no recent evidence of videos promoting the Momo challenge on its website.

Sarah Monod de Froideville is a lecturer in criminology at Victoria University of Wellington and researches moral panic.

She said it immediately struck her as being characteristic of moral panic.

There are often moral panics about media, social media, gaming, video nasties and sexting, she said, adding that there was a whole genre of moral panic centred around creepy characters haunting children.

Naturally, parents would feel upset if their children are watching disturbing content, she said.

"But if you're getting upset and there has been nothing happening yet, I would think critically about it. Is this a fear being stimulated or is this something that is actually threatening?"

'This is not real'

Netsafe's Sean Lyons said whether it was a hoax or not was a moot point.

"The very viral nature of the internet means that potentially as there is more attention on it, what you see is more incidents of it."

Whether its based on one organised group becomes less and less relevant, he said, because people have the potential to copy it.

He believed the message was still worth stressing.

"It is really important that the message is out there that this is not real, the threats to their families aren't genuine," Mr Lyons said.

"If that helps a young person to be more resilient to it and ignore it, then that's really good."

Netsafe said they had not had reports of anyone seeing the challenge, but that parents had indicated their concerns.

Police could not say whether they had had any reports of the challenge.