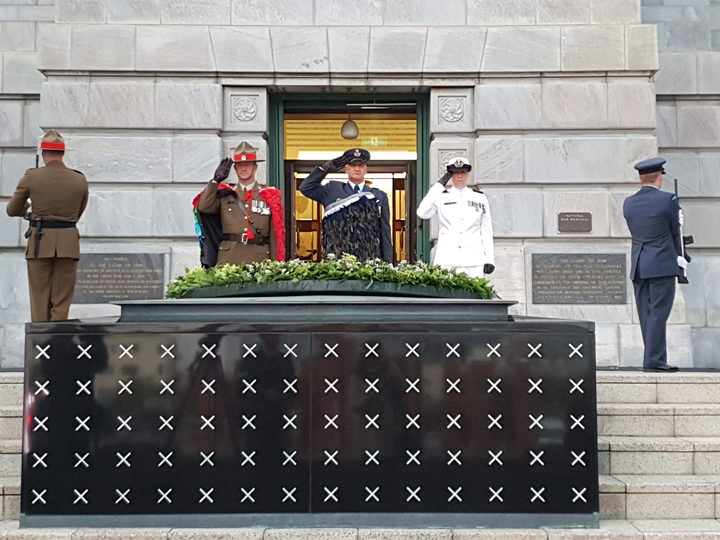 The Remembrance Wreath has been laid on the Tomb of the Unknown Warrior. Photo: RNZ
Services marking 100 years since the end of WW1 have begun with a dawn service at Pukeahu National War Memorial Park in Wellington.

Large crowds are expected at Armistice Day services throughout the country. Today marks 100 years since the signing of the Armistice that brought an end to the Great War fought from 1914-18. 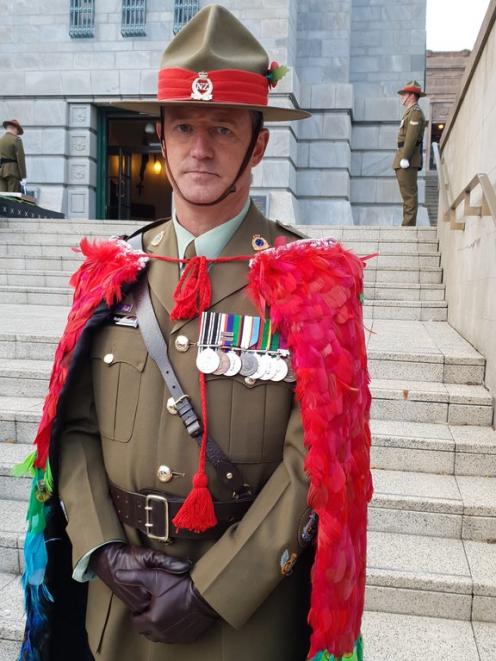 Warrant Officer Class One Robert Jobe wearing the cloak he wove. Photo: RNZ
The Remembrance Wreath was carried by members of the Defence Force and was laid at the Tomb of the Unknown Warrior.

Medals were also placed on the tomb, followed by a waiata and the last post to finish the ceremony.

Warrant Officer Class One, Robert Jobe has woven his own korowai and said the cloak was made as a symbol to link the past to the future.

Officer Jobe said he has visited different battlefields in Europe with the cloak.

"When I wove this cloak and took it Gallipoli, I thought I was picking up a piece of plastic, but I picked up bone, when I realised, I did a karakia put it back into the ground, but that is in this cloak," he said.

On the inside of the cloak were hand-stitched poppies.

Officer Jobe said it is an honour to wear the cloak at the dawn service.

"We've got some older soldiers who have been overseas and made a commitment to the Defence Force and deployed, and then you've got the younger soldiers here today, they will also get that opportunity.

"When you go overseas, when you understand what those in the past have been through and what you're going through, you get this sense of belonging understanding, that's why we're a family," he said.

In the first few minS of Armistice Day here in NZ, a stunning aurora lit the southern sky. As the pointers & southern cross reach their lowest point & we remember the sadness & despair of a futile war, perhaps this is a reminder that ours is a world of beauty & hope.#LESTWEFORGET pic.twitter.com/zovhJczNIx— Ian Griffin (@iangriffin) November 10, 2018

Christchurch's Cramner Square has been covered with thousands of crosses to remember those who died in the First World War.

A number of events are being held around Canterbury to mark the day, including a parade at Christchurch's Bridge of Remembrance starting at 10:55am.

The National Armistice Ceremony will be held at the Pukeahu National War Memorial Park starting at 10.30am.

It will be attended by the Governor General Dame Patsy Reddy and Prime Minister Jacinda Ardern.

In Auckland, a remembrance service starts at 10.30am and will include a fly-past by three World War 1 aircraft.

Both services will also include a two-minute silence at 11am, which will be followed by a cacophony of sound to replicate how the public responded to news of the Armistice in 1918.

The Royal Regiment of the New Zealand Artillery will fire a 100 gun salute from Wellington's waterfront near Te Papa at about 10:50am.

The guns will fall silent at 11am as they did 100 years ago.

The commemoration will finish at 7:30pm with a Sunset Ceremony at Pukeahu Park. The final last post of the centenary will be played at 8.15pm.