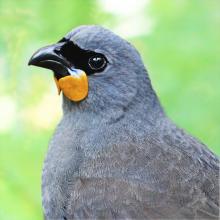 Photo by southislandkokako.org
A bird that's supposed to be extinct has reportedly been spotted in Golden Bay near the top of the South Island.

A tramper hiking on the Heaphy Track was looking for takahē in the bush within metres of the Gouland Downs Hut about a month ago and saw what he described as a large dark blue bird with orange under its beak.

The bird flew onto a branch, hopped along a couple of branches, then flew away.

It's thought to have been a South Island kōkako, known as "the grey ghost".

South Island Kōkako Charitable Trust member Ron Nilsson said that like all the half dozen or so sightings reported annually, this one would be taken seriously.

"There's probably a few birds there but not many. You know, how do you find them? It's a lot more difficult than you might imagine.

"But, every now and again, somebody hears one, somebody sees one."

The trust is offering a $10,000 reward for definitive photographic evidence of the South Island kōkako's existence.

Mr Nilsson said they had hundreds of reports from people claiming to have seen the birds over the years.

The South Island kōkako was classified as extinct by the Department of Conservation in 2007.

However, DoC states on its website that "it's remotely possible they may survive in low numbers in remote parts of the South Island and Stewart Island".

Other sightings and "hearings" of the bird have come in from the Marlborough Sounds, the West Coast (particularly the Grey Valley), South Westland, Fiordland and the Catlins.

The last accepted sighting of the orange-wattled kōkako - a separate species from the endangered blue-wattled North Island kōkako - was in Mount Aspiring National Park in 1967.