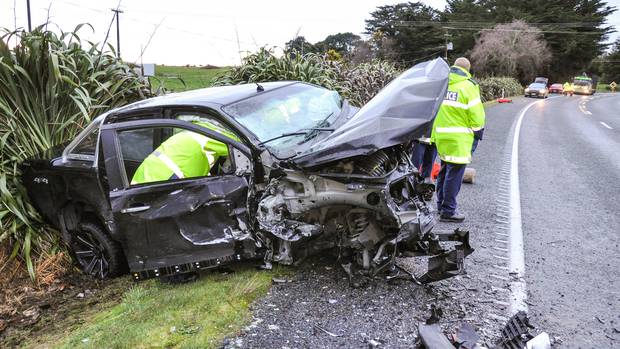 The scene of the crash on State Highway 1 near Tokoroa that killed two people. Photo: John Van der Ven / NZH
Two men who were killed in a crash near Tokoroa on Tuesday were driving to Parliament to petition the Government about the Chinese Communist Party (CCP).

The men were both from Auckland.

Three others were left seriously injured in the crash near Galaxy Rd, about 1pm on Tuesday.

Close friend and Canterbury University professor Anne-Marie Brady told the Rotorua Daily Post the men who died and another who was left critically injured were "hugely influential members of the New Zealand Chinese community".

Wang Lecheng had been a member of the Independent Chinese Pen and Xi Weiguo was the chairman of the Federation of a Democratic China in New Zealand.

The third, Yu Hongming, was recovering in the Intensive Care Unit in Waikato Hospital and was the Secretary-General of the New Zealand Values Alliance

"They were on their way to present a petition to the Government asking them to take the issue of CCP political interference in New Zealand's democracy seriously," Brady said.

She said the "accident is a terrible tragedy" and the deaths were a "huge loss to civil society in our New Zealand Chinese community".

"These people are so important and brave. They stand up for the silent majority and the New Zealand Chinese community - it is really scary for them."

Brady said there was speculation within the Chinese community that the crash could have been a form of "sabotage", but she had been assured by police that they would be checking out all avenues in their investigation.

"For many, their first thought was that of fear."