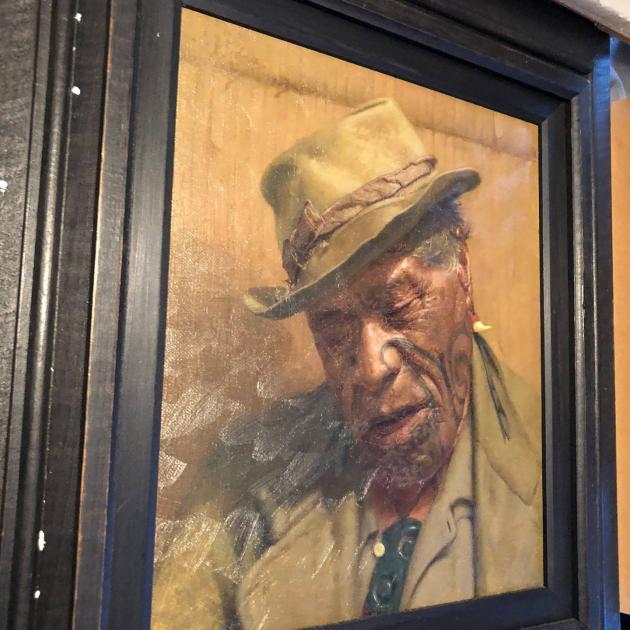 Sleep 'tis a Gentle Thing' by C.F. Goldie was stolen along with other unique artworks and antiques. Photo: NZ Police
New Zealand's top dealer in Goldie paintings says a work depicting a late rangatira Māori reported stolen would be worth well over $1 million.

Other artworks and antiques were stolen, including a Koch & Bergfeld cutlery set.

Goldie's most expensive piece, A Noble Relic of a Noble Race, of Ngāti Manawa chief Wharekauri Tahuna, sold for $1,337,687 at an International Art Centre auction in Auckland in 2016.

Director Richard Thomson said he had sold another version of the stolen painting in 2008 for a then-record of $454,000.

"So that is a million dollar plus artwork there in today's market. I've sold dozens of Goldies, and that is a really good example of his work, has all the hallmarks.

"I am quite disturbed by [the burglary]. These are hugely significant, national treasures. Owners are guardians but the nation owns them, really."

While Goldie's earlier works tended to fetch the highest prices, Thomson said the 2016 record was painted in 1941.

Despite the high valuation, Thomson said he thought it would be "worthless" in the hands of thieves.

"There is absolutely no market for it now in the wrong hands. It is a foolish thing to do and all they will get is bad karma.

"My advice is return as quick and safe as possible."

Webb's auction house head of art Charles Ninow said another version of this painting sold, at a different auction house, in 2012 for $280,000.

"I remember at the time when it sold it went for higher than average, but the market since then has gone pretty wild for Goldie. His art is just one of those things that goes up in value every year."

Ninow said he thought it would be valued slightly lower than earlier works due to Goldie's age at the time.

"When he was younger in his career he was in a better mental state, and did these really detailed paintings. As he got older they became a bit more poetic, looser, and that can affect the value."

Having a painting like that stolen would not only be of huge concern to the owners, but to Māori, who regarded these depictions of tūpuna, ancestors, as "embodying the wairua, soul, of the sitter".

"So having it stolen and not knowing the whereabouts is a great loss to Aotearoa, to our culture and our nation."

Ninow said it was likely the burglar/s would have known what they were doing.

"His works are immediately recognisable, he's a household name, like Colin McCahon. Everybody knows them, and they are highly-sought-after. If you've ever seen one in the flesh, it just hits you different."

However Ninow believed it would be "impossible" to sell underground.

"The New Zealand art market is bigger than most people think, but it is still small, and there is no way it could be sold through traditional channels. Once it's known a work has dubious origins no one will touch it.

"With stolen works we often never know what happens to them. They move through these underground channels and we never see them again, but I really hope that does not happen and we get to see it again."

Police are appealing to members of the public for any information or possible sightings of the items stolen.

"These are obviously very special heirlooms and we would love to be able to return them to the owner as soon as possible," said Constable Ben Monk of the Hamilton Tactical Crime Unit.