Prime Minister Bill English is talking tax cuts - saying "something will be covered'' in the upcoming Budget and any changes would take effect from April 1 next year. 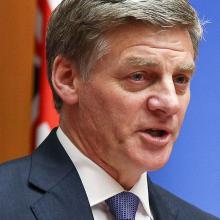 "There will certainly be something covered in [May's] Budget. Look, there's not going to be some big sugar shock with tax cuts. We have a range of tools, we want to be able to help and support low and middle income families,'' Mr English told Newstalk ZB.

Adjusting tax brackets was "part of the discussion'' about how to give tax relief, he said.

Last week the Government recorded a stronger operating surplus than forecast, at $1,145 million for the seven months to January, compared with the $442 million surplus that had been forecast.

Also this morning and in a Radio New Zealand interview, Mr English indicated any tax cuts would take effect from April 1 next year. He said the Government was spending enough on infrastructure to help New Zealand cope with a growing population.

Labour's finance spokesman Grant Robertson said Labour would not raise taxes if it leads the next Government, aside from a policy, previously announced, to extend the "bright line'' test from he current two years to five years, to target property speculators.

"We believe with the large forecast surpluses out there we can fund what we have got and our promises. The caveat on that is we haven't seen the Budget yet, and the slow strip-tease from Steven Joyce and Bill English - sorry to give people that image over their cornflakes - on tax cuts means we have to make sure we see what they do and factor that in,'' Mr Robertson told RNZ.

The Government shelved plans for a small $1 billion tax cut programme in last year's Budget and instead put the money into health.

However, then Prime Minister John Key signalled more significant tax cuts were in the pipeline either for 2017 Budget or as a National Party policy in the 2017 campaign.

The last round of tax cuts were in 2010 when National reduced the thresholds and lifted GST to 15% to pay for it. It left the "average earner'' $15 a week better off.