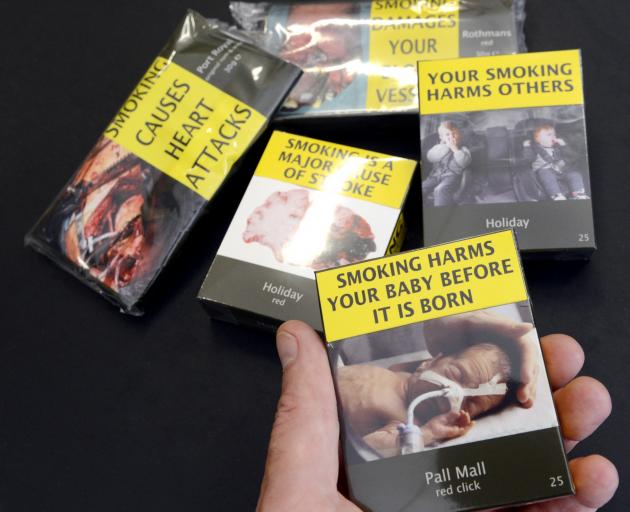 The new look for tobacco products. Photo: Gerard O'Brien
New regulations governing tobacco packaging come into force today, a move an anti-smoking lobby group says is a vital step towards the goal of New Zealand being smokefree by 2025.

From today, cigarettes and other tobacco products can only be sold in generic plain brown and green packaging - brand and product names are now in a standard colour, position, font size and style.

In addition, a new set of 14 health warnings and images have been rolled out, enlarged to cover at least 75% of the front of the packet.

''It's a long-overdue move which has been discussed for over 30 years,'' Action on Smoking and Health (Ash) programme manager Boyd Broughton said.

''It's not the be-all and end-all - a lot of other strategies have to be put in place in order to get to smoke-free 2025 - but we can achieve that goal.''

Old-style packets of cigarettes will still be seen for a few weeks yet: retailers have a six-week grace period for old stock to be distributed and a further six weeks for that stock to be sold.

From June 6, tobacco can be sold only in the new standardised packets.

Mr Broughton said the change came at the halfway point of the timeframe for a smoke-free New Zealand - smoking rates of less than 5% - to be achieved.

''Plain packaging is one part of a whole suite of strategies recommended to stop young people being addicted to cigarettes,'' Mr Broughton said.

''We now need to look at how we can make alternatives to cigarettes far more accessible.''

Smoking rates in the Southern District Health Board region range from 18% of adults in the Invercargill electorate area to 11% in Dunedin North.

Maori are New Zealand's biggest users of tobacco and that is reflected in Te Tai Tonga - the Maori electorate which takes in the South Island - having the highest number of smokers.

Latest Ministry of Health figures show 15.7% of adult New Zealanders smoke - as do 40% of Maori women.

''It is urgent that action be taken now if we are going to reach smoke-free by 2025,'' Mr Broughton said.

''It's a bit of a sprint finish, and we need the Government to get in behind and ramp up support for people who need support to quit.''

Southern DHB health adviser Joanne Lee said plain packaging aimed to reduce the attractiveness and appeal of tobacco products, increase the noticeability and effectiveness of health warnings, and reduce the ability of retail packaging to mislead consumers about the harms of smoking.

''Tobacco products are unlike any other consumer products. They kill two out of three people who smoke and more than 5000 New Zealanders die of smoking-related illnesses each year,'' she said.

''Having all packaging the same will hopefully see a decrease in youth smoking.''

Otago researchers have welcomed standardised packaging for cigarettes as a good move, but say more needs to be done in the fight against tobacco.

The co-director of ASPIRE2025, Prof Janet Hoek from the University of Otago, said today the plain packaging policy represented a major step forward in protecting young people from smoking initiation.

However, she called on the Government to ensure standardised packs maintain their impact on smokers.

“On-pack warnings are very important because they allow us to reach all smokers, but we must recognise that people who have smoked for 30 years differ from young people who are experimenting or who regard themselves as social smokers."

The warnings needed to resonate with diverse groups of smokers, and be refreshed regularly so smokers are exposed to multiple reasons for quitting, researchers said.

“We are only seven years from the Smokefree 2025 goal so we need to make sure that the policies introduced achieve maximum impact over a sustained period,” Professor Hoek said.

Timeline of tobacco advertising in NZ

1948 - First campaign by the Department of Health on the harms of smoking.

1963 - Cigarette advertising banned in television and radio in New Zealand.

1997 - Size of tobacco advertising in stores in reduced, and retailer incentives to sell cigarettes are banned.

2008 - All cigarettes and tobacco pack are required to have graphic health warnings covering 90% of the pack.

2012 - All point of sale advertising of tobacco is banned, and cigarettes and tobacco product must not be on display.

2018 - All cigarettes and tobacco must be sold in plain packaging

SOURCE: Action on Smoking and Health.