Tongariro Crossing death: 'It was an amazing place to die' 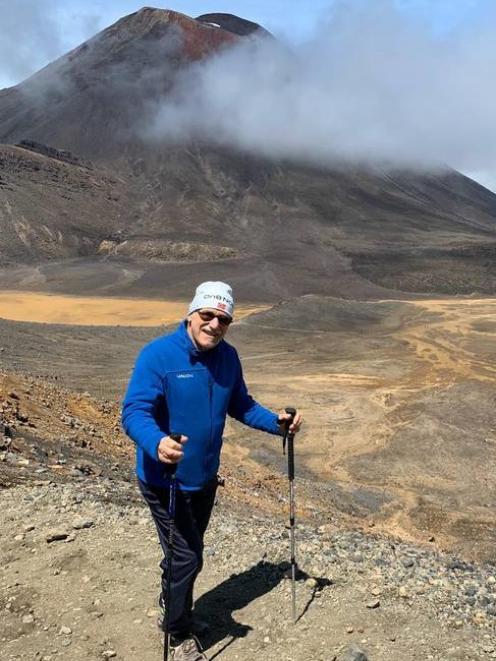 Gerd Wilde knew his final days were in front of him and he went on an adventure halfway around the world. Photo: Supplied via NZ Herald
A German tourist suffering from prostate cancer died with his son holding his hand and New Zealand's rugged beauty at their feet.

Gerd Wilde, a 75-year-old dentist from Berlin, was walking the Tongariro Alpine Crossing when he passed away on Friday about midday.

After battling the disease for years it had spread throughout his body and he keenly felt the importance of spending time with family and travelling to exotic places.

"He had the feeling he was not staying long on this planet," his son Simon Wilde told the Herald.

So together they embarked on a whirlwind adventure that included Costa Rica, Australia and New Zealand.

They were places he had never been before and always wanted to visit, Simon Wilde said.

He described his father as a very active man who never complained about being unwell.

They knew walking the mountain would be big because of his father's age but he was determined and in good spirits.

On Friday, they were about 100 metres from the top of the mountain, when the 75-year-old paused, needing to sit down.

"He was smiling, he felt good. Then he said he wanted to have a short rest," Simon Wilde said.

But soon he was shaking and collapsed. It was believed he had a heart attack.

"I had his hand in my hand and I talked to him but I could see in his face he was away."

A French firefighter and a Swedish doctor on the mountain both came to their aid but their 45 minutes of efforts to revive Gerd Wilde were in vain.

The Greenlea Rescue Helicopter also attended the scene but it was too late to save him.

"It was an amazing place to die," Simon Wilde said.

They were just days into the Kiwi leg of their world tour when the tragedy struck and had other countries ahead of them.

"He really loved this place because it is so silent. He could really relax. The nature is incredible."

In New Zealand they had also been able to go canoeing with an old friend from Wellington. They had flown into the capital city and spent three days there before heading north.

Simon Wilde said he was glad he took the chance to travel with his father and felt it imparted one powerful message about living life in the present.

"One day there is no next time."

A particularly sad aspect of his passing was that he would not be able to walk his daughter down the aisle for her wedding later this year, he said.

That was something that she always wanted, he said.

Simon Wilde said he was incredibly moved by a ceremony conducted with senior constable Barry Shepherd and Ngāti Hikairo in which a rāhui was placed upon the mountain.

They had talked about the relationship between nature, the mountain and all human-beings, he said.

"It was really, really amazing," he said.

He was overwhelmed that they closed the mountain out of respect to his father.

"I am really thankful. I couldn't imagine that people could be so nice."

Gerd Wilde will be repatriated home to Germany.