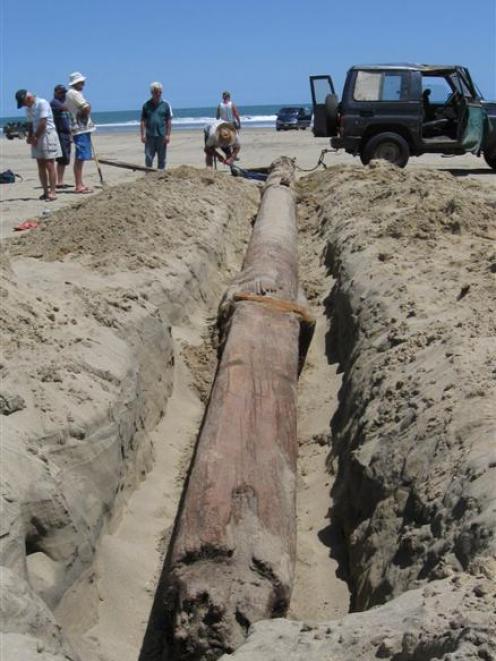 The mast of a wrecked sailing ship is retrieved from its sandy grave on the beach just north of the Kaipara Harbour heads on Northland's west coast - The oregan mast is thought to be about 140 years old. Photo supplied/NZPA.
A sailing ship wreck possibly more than 200 years-old has been buried again under the sand of a Northland beach after it was exposed by wave action.

It was found several weeks ago under about four metres of water on the beach north of the Kaipara Harbour entrance on the west coast, an area well known for shipwrecks.

Maritime historian Noel Hilliam from the Dargaville Museum, said wave action had scoured away thousands of tonnes of sand to a depth of more than four metres.

That had exposed the blunt bow of the ship at low tide but leaving the rest of the wreck still buried in the sand.

The blunt bow design meant the ship was probably in service in the late 1700 or early 1800s, he said.

That was only a few decades after Captain James Cook's first voyage of discovery to New Zealand in 1769 on HMS Endeavour.

The ship probably came to grief when it was unable to sail against the prevailing wind and currents and was washed onto the beach.

"They couldn't point up to the wind and sail off. They couldn't anchor out there and they wound up on the beach."

Mr Hilliam said the wreck could be salvaged if the wave action removed the sand again but it would be a costly mission.

"Getting excavators and transporting them is big money and we haven't got that sort of money," Mr Hilliam said.

He said Captain Cook's Endeavour had a similar blunt bow design as the wreck.

When the wreck was exposed the bow and broken off bowsprit were visible, he said.

"We saw about a quarter of the length (of the ship) ...the bow was sticking up and she was angled down. The back portion was completely buried."

The ship was in about four metres of water at low tide but the day after divers surveyed it the surf came up and buried it again.

Mr Hilliam said sailing ships of that era had a limited life.

"They had a life of about seven years if they were lucky."

The name or details of the ship were not known but could produce a huge amount of historical information and it was possible some of the contents or cargo of the ship could be recovered.

"All the wrecks on the coast are time capsules. If the hull is intact they can still carry what they were shipping at the time."

The area had 153 known and recorded shipwrecks.

The area around the entrance to Kaipara Harbour was known as "The Graveyard" because of the large number of ships wrecked there.

Further south, an Oregon mast was found just north of the entrance to Kaipara Harbour about six weeks ago.

Mr Hilliam said the mast was believed to be about 140 years-old.

It was found after strong winds levelled off the top of a sand dune and the exposed end of the mast was spotted by a local tour guide taking visitors to sites along the beach.

Mr Hilliam said the mast, believed to be a mizzen mast, could be from one of the many ships wrecked on the beach.

It was dug out of the sand and was now on display at the Dargaville Museum.

He said it was in "remarkable" condition but would be displayed horizontally to let visitors see the details of it.

When it was found it was wrapped in steel cable rigging but that was in very bad shape and fell to pieces when the mast was dug out of the sand.

The mast would have come off a ship on the bar at the entrance to the Kaipara or further down the beach, he said.

"We searched the whole area with a magnetometer and came across nothing."

He said like many wrecks the mast was buried as the sand moved in the wind and tides.