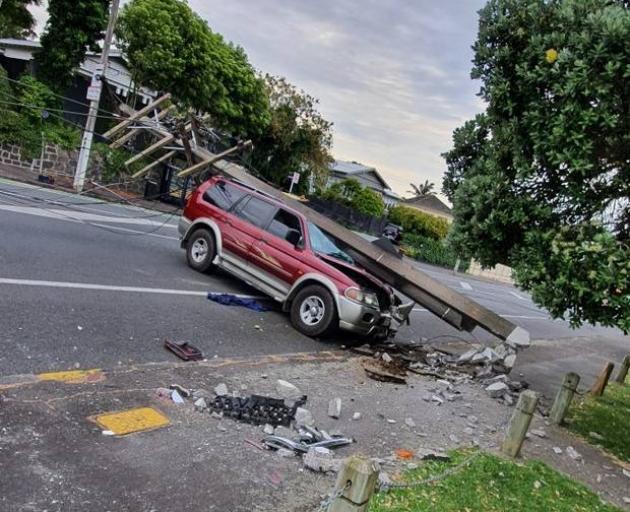 A vehicle has crashed into a powerpole in Sandringham - taking out power to the area. Photo: James Sturch
Two people fled the scene of an Auckland crash when their car smashed into a power pole and knocked it over.

The crash knocked out power to parts of the suburb of Sandringham - and electricity isn't expected to be back on until 4pm.

Emergency services raced to the scene of the collision on Sandringham Rd near Mars Ave at about 4:30am.

The vehicle involved struck a power pole - which then fell on top of it.

Powerlines fell down on the road, which was blocked as a result.

The crash happened about 4.30am.

Motorists are being diverted at Shorewell St.

Police said two people who were in the vehicle at the time took off on foot and authorities are still working to find them.

Auckland Transport issued an alert at 6.15am saying, due to the crash, Sandringham Rd between Jason Ave and Oxton Rd is blocked.

"Follow directions of emergency services on scene or avoid this route," the alert said.

Nearby Edendale Primary School has been closed for the day as a result of the crash and power outage in the area.

A resident on the street said he had received a text alert saying power was expected to be back on in the area by about 4pm today.

Meanwhile, emergency services are also responding to a crash north of the city, in Northcote.

A crash on Exmouth Rd, between Sylvan Ave and Deuxberry Rd, is causing delays in that area and drivers are being told to find an alternative route or delay travel time.