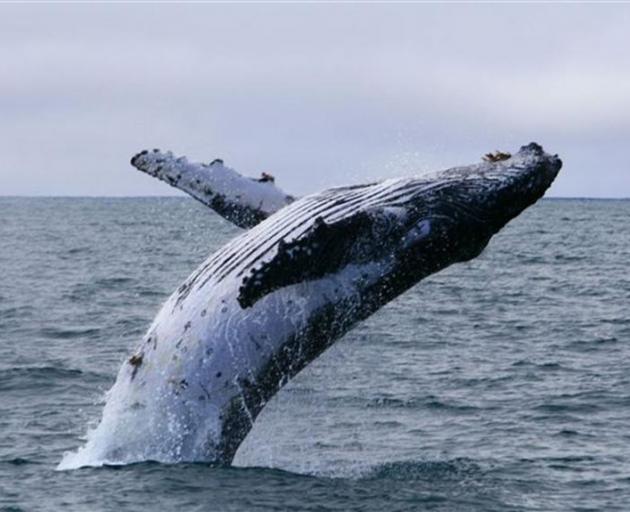 A humpback whale calf breaching near Taiaroa Head. Photo: Supplied by Monarch Wildlife Cruises.
Hundreds of volunteers are lining the country's coasts this weekend to record whale and dolphin movements.

The second annual Citizen Science Cetacean Census takes place over the next two days, and anyone with an interest in the marine mammals can join.

The census' purpose is to build a snapshot of whale and dolphin population and migration, its organiser Christine Rose said.

"It is hoped that sightings records will grow over time and contribute to greater awareness of New Zealand's marine biodiversity, and that an increase in marine mammals will be detected as species recover from last century's whaling impacts," she said.

Volunteers will brave wintery weather to set up post on headlands, high-points and boats to record sightings. That information is then entered into a central database, which is passed on to the Department of Conservation for research.

This time of year is chosen because it is particularly good for Humpback whale sightings as they move from Antarctica to warmer waters.

"They are really conspicuous, partly because they are so large, but also they have this amazing thing of throwing their bodies out of the water."

Last year's survey recorded Humpback whales seen above and below the water, Orca pursuing stingrays under Marsden Cove pontoon, and an array of other whales and dolphins, she said.

Rose said it is a lot of fun and can be done as a group.