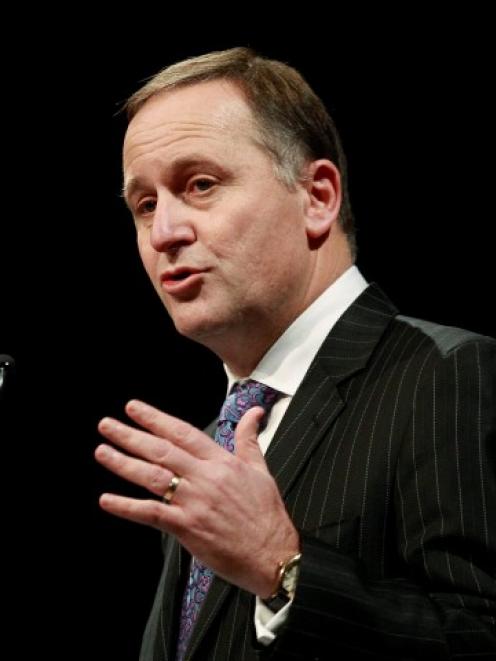 Finance Minister Bill English delivered an election year Budget which includes a bigger than forecast surplus, free doctors visits for 400,000 more children, and big cuts to ACC levies. It also dangles the prospect of tax cuts in front of voters.

Finance Minister Mr English said the Government's much vaunted return to surplus would be $372 million, still slender but well ahead of the wafer thin $86m forecast six months ago, thanks to a rosier economic outlook.

With the books back in the black and the economy gathering steam, Mr English said this was the first Budget in six years "to focus on managing a growing economy rather than recovering from a domestic recession and then the global financial crisis".

The $1 billion in new spending is dominated by "a $500 million package of extra support for children and families".

Speaking to reporters after his Budget speech, Prime Minister John Key said the Budget was "a reflection of the fact that the Government has worked hard with the people of New Zealand to get back into surplus, and it does give us some room".

"So it's natural that the first place and the focus of attention would be on families, and particularly vulnerable children.

"I think there's a lot of New Zealanders tonight who'll say free doctors visits, free prescriptions for under 13s is welcome, paid parental leave - an extension of the scheme which is affordable - and just generally spending in the areas that are going to support families and ensure they can carry out the lifestyle that they want."

But Labour Leader David Cunliffe said the Budget "lacks vision, it lacks substance, it lacks direction, it reinforces privilege, it short changes New Zealanders, it does nothing to solve the housing crisis; this is a fudge-it Budget that takes New Zealand nowhere".

National had borrowed from Labour's playbook with policies including an the paid parental leave extension, "unfortunately for New Zealanders they haven't done it very well", Mr Cunliffe said.

"These are smaller narrower benefits and if New Zealanders want the full package, it's very simple - vote Labour."

While Mr Cunliffe said National had plundered Labour's ideas, "fortunately we have many more".

Apart from the well-flagged extension to paid parental leave, the Government's $500m package for children and families also features $90m over three years from next year to extend free doctors' visits and prescriptions to all children under 13. Previously it was limited to children under six.

Health Minister Tony Ryall said the move, which takes effect from July next year, would benefit more than 400,000 primary school-aged children and their families.

A $172m a year extension to paid parental leave will initially take it from the current 14 to 16 weeks on April 1 next year, rising to 18 weeks a year later.

Mr English also said eligibility would be extended to "home for life" foster caregivers and those in part-time, casual work or with multiple employers.

The Government will also "significantly boost" the parental tax credit available to working families not on a benefit and not receiving paid parental leave. It will go from $150 a week to $200 on April 1 next year.

Mr English also flagged a $480m cut to ACC levies from next year, including cuts to motor vehicle levies which could cut the average private car levy by about $130 a year.

The Budget shows surpluses rising to $1.3b next year and $3.5b after that.

New spending in subsequent Budgets would rise to $1.5b next year and by 2 per cent a year after that. Mr English said that was the upper limit for increases that would, combined with reprioritised spending, allow for "additional support for New Zealanders, without pushing interest rates higher than they would otherwise be."

Any government that raised spending by more than that, "needs to explain the effect on interest rates," Mr English said at the Budget lock-up early this afternoon.

"This moderate increase will provide the Government with future options around investment in public services and modest tax reductions."

He said the Government was "not prejudging the size of any tax reduction" or the proportion of future operating allowances that would go to them.

"We haven't established a view about it. No doubt there will be a debate about that over the next months and years."

Among the big ticket items of Government spending, health will receive $1.8b in extra funding over the next four years.

The Budget sets out how $1b of the $4.7b raised through asset sales will be spent this year. Health will receive $200m of that including $67m for the new Grey Base Hospital on the West Coast.

Struggling state rail company KiwiRail receives yet another $198m for its troubled "Turnaround Plan", including $25m to pay for repairs to Cook Strait ferry Aratere. That takes the total bill for fixing up KiwiRail to over $1b since 2010-11 or $2.4b since 2008.

Irrigation projects will receive $40m, and $172.5m goes to the upgrade and repair of schools.

In addition to projects funded by asset sales cash, $375m of new capital funding in the form of an interest-free loan will go to the New Zealand Transport Agency to speed up $815m worth of Auckland transport projects aimed at reducing congestion.

However the Budget contains scant direct relief for first-home buyers, with the only new initiative being the temporary suspension of tariffs and duties on building products which the Government said would reduce the cost of a standard new home by about $3500.

- By Adam Bennett of the NZ Herald