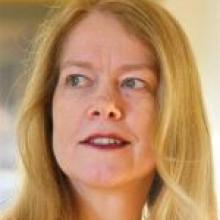 Hilary Calvert
Act New Zealand MP Hilary Calvert was philosophical yesterday despite being dumped from the party list for November's election less than a year after entering Parliament.

"I'm happy and fully supportive of the decisions the board has made."

Although Ms Calvert's arrival into Parliament pulled the party back to its roots, she was evidently seen by some as prone to mistakes - political talk for being from the South Island and not fitting in with the urban image the party wanted to project.

She has been the subject of a campaign within the party to ensure she was not on the list.

When leader Don Brash refused during an interview with the Otago Daily Times earlier this month to pledge his support for Ms Calvert, it seemed obvious the campaign had taken its toll.

Ms Calvert (56) replaced disgraced MP David Garrett after it was revealed he had once stolen the identity of a dead baby to obtain a false passport.

Having rolled former leader Rodney Hide and ensured Heather Roy would resign from Parliament at the election, Act now looks even more dysfunctional as its popularity in the polls remains in the margin of error.

Former National Party cabinet minister and former Auckland mayor John Banks will need to win Epsom to ensure the party has any representation in Parliament after the election.

Mystery surrounds the vacant No 3 position on the party's list.

Dr Brash said the position was being held for someone who had the unanimous support of the board, and had strong credentials for the role, but was not in a position to confirm availability.

The person concerned was not an MP.

With Ms Calvert gone from the party, the No 3 position seems likely to be held for a woman.

The next highest woman on the list is Kath McCabe, at number nine. On current polling, only three MPs are likely to make the cut.

A former president, Catherine Isaac, formerly Catherine Judd, could be slotted into the vacant position.

Former Federated Farmers president Don Nicolson is the only South Islander on the list, at number four.

Ms Calvert said it had been a privilege and wonderful opportunity to be an MP and other people would decide what contribution she had made to the party.