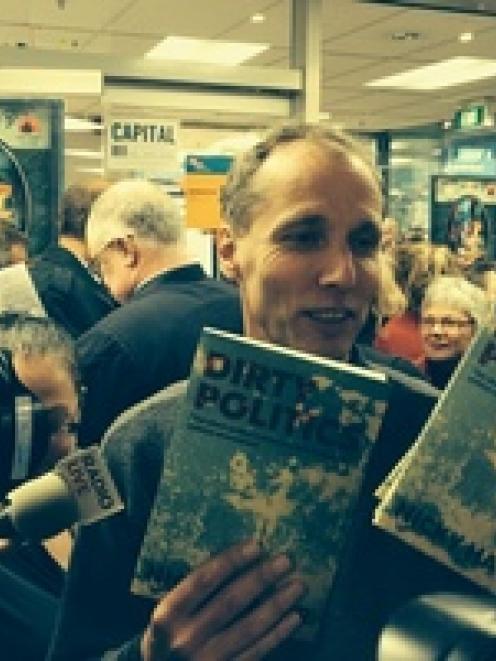 The book, which has been released in Wellington tonight, aims to tell the story of "how how attack politics is poisoning NZ's political environment".

It includes email correspondence between Whaleoil blogger Cameron Slater and Jason Ede, one of the Prime Minister John Key's press secretaries, in relation to information found on Labour's website.

The National Party had denied any involvement, but Mr Hager's book showed Mr Slater and Mr Ede had discussed the information and how to avoid being caught.

Mr Hager said the Prime Minister's office had been "collaborating" with National Party "proxies" who were carrying out attacks on behalf of Mr Key while working to preserve his image.

"Part of the book is about how John Key has cultivated a very respectable image of being friendly and relaxed but at the same time there has been another part of his politics which New Zealanders have not seen or understood."

Mr Hager described Mr Slater as an "obnoxious" blogger whose attacks on a young man killed in a car crash earlier this year had led to hackers attacking the Whaleoil website.

He said the attack knocked out the Whaleoil site for a number of days during which time a hacker had come away with "thousands and thousands" of documents.

He said the papers revealed an "an astonishingly cynical and ugly view" of the way National's "proxies" behaved in politics.

Mr Hager said people would become increasingly astonished as they read through the book because the "dirty politics" only got worse.

"You will not believe what you read and how bloody awful it is."

In a speech prior to the launch, the book was described as one which "implicates John Key and senior National Party staff".

It ''revolves around a cast of Key, Cameron Slater, Jason Ede, David Farrar, Judith Collins and other National Party figures''.

"It shows a very different side of John Key and his Government than most New Zealanders know'', the book's publishers said.

Hager's earlier books have included Seeds of Distrust, which threatened to ankle-tap former Prime Minister Helen Clark as she headed into the 2002 election.

Mr Hager followed with The Hollow Men which gave voters an inside look at the manipulations of National's 2005 campaign. His 2010 book Other People's Wars exposed New Zealand's intelligence and military activities in Afghanistan and Iraq during the "War of Terror" - a stark contrast to the friendly, public relations-driven view the New Zealand Defence Force had offered.

His previous access to well-placed intelligence sources have driven speculation he was preparing to release Edward Snowden-sourced documents about New Zealand's involvement in the US-led Five Eyes spying alliance. But talk around Wellington yesterday had some leaning towards an expose on political manipulations.

It's a view which is in contrast to praise from US journalism legend Seymour Hersh, who last year said: "Nicky Hager has more knowledge and understanding of the American intelligence world in Afghanistan - both its good and its very bad points - than any reporter I know."

The release of the latest book has been carried out in total secrecy. Publicity for the book ahead of the launch has been non-existent, although the launch itself at Wellington's Unity Books has become today's must-attend Wellington function.

Media commentator Russell Brown said Mr Key's comments should be seen as preparing the ground for whatever might be coming by attempting to diminish Mr Hager's credibility.

"They are generally stories people don't want told," he said of Mr Hager's work. "You can see that in the push back which comes before the book comes out."

Mr Brown, AUT's Journalist In Residence and frontman with Toi Iti for Maori Television's Media Take, said Mr Hager had proven his credentials repeatedly and should be regarded as credible.

"One very valuable thing about Nicky is that he operates at a different level to most journalists. He has a strong sense in the public interest. He can take a long time to get the detail right. We're lucky to have someone in his position."

Mr Brown said Mr Hager's books fell into either the "barnstormer" or "technical" category and he expected this one would be greeted as a "barnstormer".

Mr Hager's first book was Secret Power, published in 1996. It was a world-exclusive and remains the authoritative text on the United States-led pre-digital spying network called Echelon.