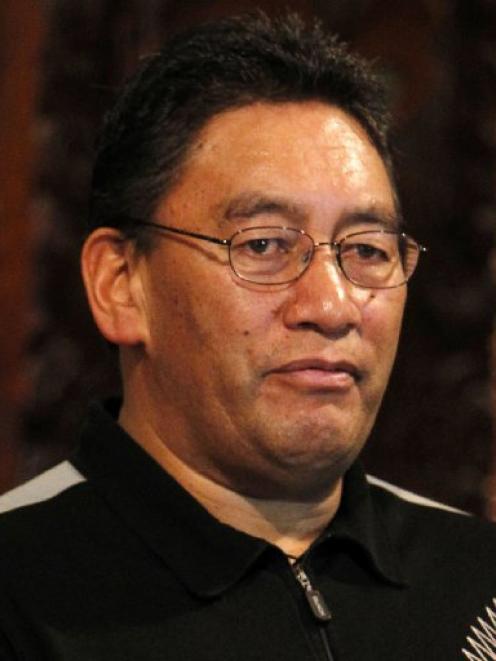 "And I don't think he bought it particularly to read. I think it was a massive investment," he said.

Other politicians had read books by Jospeh Stalin and George Bush.

"You can't judge people by the books they read."

Mr Harawira said he had started Karl Marx's classic on capitalism but never finished it.

"I couldn't read that Das Kapital - it was just too hard."

And he said Labour MP Shane Jones had just finished reading a series of books on Julius Caesar.

Mr Harawira's party has been have talks about co-operating with the Internet Party at the election but has put the talks on hold until it knows more about it, such as its policies, its candidates, and its leader.

In an interview with 3 News last night, the German internet entrepreneur said he had bought a rare signed copy of Hitler's autobiography at an auction four years ago.

"I'm a Call of Duty player right ... It's all about World War II and how you play and I'm a big fan of that. I've bought memorabilia from Churchill, from Stalin, from Hitler."

But Mr Dotcom denied his ownership of the book meant he subscribed to Hitler's Nazi ideology.

"Well let me make it absolutely clear, I'm not buying into the Nazi ideology. I'm totally against what the Nazis did."

A spokesman for Mr Dotcom told the Herald the Megaupload founder, who is fighting a US bid to extradite him on internet piracy charges, decided to go public over the book before his adversaries did.

He and his camp were aware of "insinuations" that Mr Dotcom owned the book which were "part of an ongoing smear campaign that's been fomented by various bloggers and opponents" including Whale Oil blogger Cameron Slater.

"That's where it's been coming from by and large. It didn't take a lot of rocket science as it were what the general thrust of these things were. It's something that we thought we should front-foot."

Mr Dotcom indicated his copy was dedicated to the man Hitler shared a prison cell with when he wrote the book, "so it was one of the first prints and probably the first book he signed". In April 2011, UK auctioneer Mullocks sold a rare signed first-edition Mein Kampf for about $35,000 to a buyer reported as being from Munich.
That edition was dedicated by Hitler to Hermann Esser, a founding member of the Nazi Party who was an inmate with Hitler in Landsberg Prison. Mr Dotcom said his World War II memorabilia including Mein Kampf were worth a lot of money, "and I think in another 100 years that book will probably go up in value times 10".

"We're always disappointed that anyone wants to make profit out of the suffering of others and making profit out of Nazi war memorabilia shows great disrespect to those who suffered."

The Internet Party will formally launch its bid to sign up the 500 members necessary for registration at midday today and will be the first party approved to use online and smartphone technology to do so.

Mr Kumar said the launch at Mr Dotcom's Coatesville mansion will also see the release of a 10-point "Action Agenda" giving prospective members the first detail of the party's policies.

Mr Dotcom's Mein Kampf admission comes days after he Mr Harawira confirmed they had been in talks over a potential alliance to contest this year's election.

But Mr Harawira yesterday said his party would work co-operatively with any party that was committed to changing the current Government "and I don't think the Internet Party is ready to take that stand at the moment".

• The Internet Party's "Action Agenda'' today will likely include polices about:
• Better and faster internet, including a plan to promote a second international data link to New Zealand.
• Reform of laws around internet mass surveillance by intelligence agencies.
• Plans to ensure rural areas get fast internet.
• Promoting more internet-based employment and economic activity.
• A review of New Zealand's involvement in the Trans Pacific Partnership.