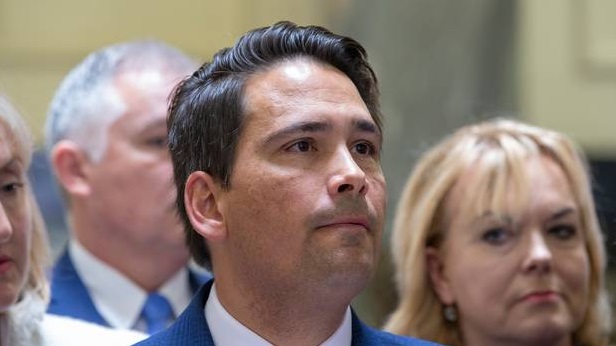 "I trust Judith Collins," he said before heading into the House this afternoon while facing questions from media.

This is despite repeatedly refusing to say that he trusted Collins when asked by media at Parliament this morning.

This issue arose amid speculation that support for Collins as leader was on the rise in caucus.

Bridges was pressed multiple times to say the words 'I trust Judith Collins' but refused each time.

Instead, Bridges opted to say he "trusts all his colleagues".

"I trust Judith Collins. I have set her a task which is to get out there and go at it – she does that attack roll really well."

Asked what had changed between this morning and this afternoon, Bridges said the media were "over-analysing things".

"I felt confident now, I still do – I have a strong and united caucus."

This morning, Collins would not rule out a leadership bid – saying only that she had "no plans" to be the National leader "today, or in the near future that I'm aware of".

Although she said she had full support for the "National Party leader" she refused to say the words "I support Simon Bridges as National leader."

She said Bridges should trust her.

"I'm a very good person, a good member of the National Party and I do my job. I think everyone should just do their job."

Before going into National's caucus meeting this morning, Bridges said he was confident in his leadership and said he would be bringing up "the need for discipline".

This afternoon, he said he had made the need for unity and discipline clear.

He again said that he was "confident in his leadership and really confident we have a strong united team".

She said she never talked about what happened within caucus, but repeated that fact she was a "very happy member of the National caucus."

Other National MPs were singing a similar tune.

When asked if National's leadership was discussed, the party's deputy leader, Paula Bennett, said: "All is good with the National Party."

When pressed, she would not go into detail about what was discussed behind the closed doors of the caucus room.

National's MP for Tamaki Simon O'Connor would not comment about what happened during the caucus, but he did say Bridges' leadership was secure.

Although National MPs were staying tight-lipped, MPs from other parties were not short of an opinion.

"There is nothing as antiseptic as saying I told you so," NZ First leader and Deputy Prime Minister Winston Peters said.

"But a long time ago I did," he said in a nod to his previous comments that he thought Bridges would be rolled as National's leader soon.

Even Prime Minister Jacinda Ardern, who usually stays out of any conversations about National's leadership, had a crack at Bridges in the House, when he questioned her leadership.

"Raising leadership issues today; bold call Mr Bridges," she said in response to a question about her not being across the details of a KiwiBuild question.

Collins has been climbing in the preferred Prime Minister rankings and, in the most recent 1 News/Colmar Brunton poll, Collins and Bridges were both even.