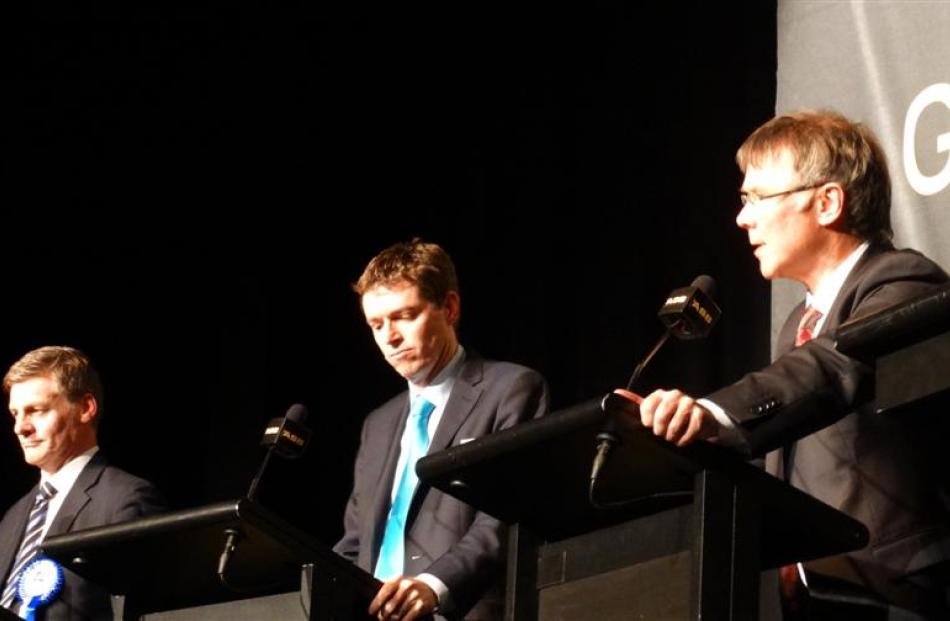 It wasn't dirty politics but a David Parker gaffe about ''low value'' immigrants that jumped out during a pre-election political debate in Queenstown last night.

But the book was not raised again for about an hour, set aside in favour of policy issues.

It was on one thorny issue, that of immigration, where Mr Parker, Labour's finance spokesman, came unstuck.

Last week, government figures showed annual net migration for the 12 months to July had hit 41,000 and was predicted to reach record highs later this year.

Conservative Party leader Colin Craig said he wanted that figure to be cut in half.

Mr Parker, meanwhile, said immigration levels should be lower but it was not possible to put a number on it.

Some immigration could be controlled, Mr Parker said, and he used Queenstown as a good example of that - highlighting the success of the local soccer team because it was stacked with Brazilians.

He started to say: ''We've got a lot of low-value immigration - no, not low value, these are good people ...''

Mr Parker tried to backtrack, saying he was referring to immigrants taking low paid work, but he was pinned down by MC Duncan Garner, who said, to the crowd's laughter: ''Who are the low-value ones, Mr Parker? This is your moment of 2014.''

Mr Parker retorted he was in favour of high-skilled immigrants for well-paid jobs and was less convinced about foreigners working on wages close to the minimum wage.

He finally gained ground with the crowd of several hundred people, getting applause for saying a ''living wage'' should be paid to encourage more New Zealanders into low-paid work.

On tax cuts, Finance Minister Mr English said the Government would look at ''moderate'', prospective tax cuts for low and middle-income earners, although there was little money available.

Asked if the economy had peaked, Mr English agreed that was probably true, ''in terms of a point growth rate''.

The debate had the usual friendly banter.

Mr English, who is stepping down as the Clutha Southland MP at this election but remains on the party list, welcomed his political colleagues to his last official engagement as the ''MP for Queenstown'' by saying: ''We're always keen to see wealthy tourists from up north.''

Mr Norman had arguably the best-received and most succinct answer of the night.

Asked why a high-earning adult who decided not to have children should have their tax dollars handed to out-of-work parents who had four to six children, Mr Norman replied: ''Because it's wrong to punish children for the decision of their parents.''