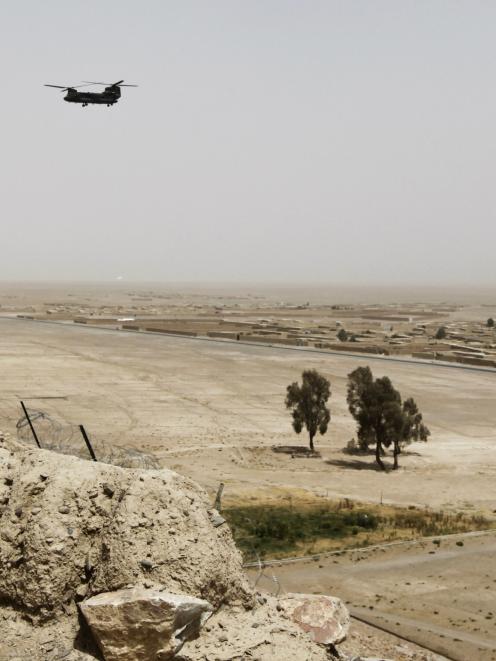 A US Chinook helicopter flies over the border area between Afghanistan and Pakistan. (REUTERS/Amie Ferris-Rotman)
A new book on the war in Afghanistan reveals that the base which has long housed New Zealand soldiers carrying out reconstruction and aid work is also home to covert operatives from America's Central Intelligence Agency.

Other People's War - authored by investigative writer Nicky Hager - says the Defence Force has deliberately kept the public in the dark about the presence of United States intelligence staff at the headquarters of New Zealand's provincial reconstruction team in the Bamiyan province.

Hager says "Kiwi Camp" has been doubling as a secret CIA base - one of several across Afghanistan charged with gathering "actionable intelligence" for use in special forces operations and aerial attacks on insurgents.

The book quotes unidentified former soldiers who have served in Bamiyan during New Zealand's eight-year deployment as saying half a dozen plain clothes American intelligence officers live on the base full-time and are privy to intelligence gathered by New Zealand troops when they go out on patrol across the region.

The book includes a photograph taken last year in Bamiyan of one American intelligence chief with gun and holster.

Under the deal with Washington by which New Zealand took over the base, the CIA operatives receive protection, meals, medical assistance and logistical support courtesy of the Defence Force.

Hager says the camp has also been used by America's National Security Agency, which specialises in eavesdropping on electronic communications worldwide.

He also claims that under a secret agreement with the United States, New Zealand intelligence personnel have worked out of Bamiyan following training by the National Security Agency.

Hager - best known for his expose in The Hollow Men of the inner workings of the Don Brash-led National Party - points to what he sees as a glaring gap between the official picture of the provincial reconstruction team's work in Bamiyan and the reality of a deployment long "entangled" with the American military's strategy for countering the Taliban.

New Zealand has had a provincial reconstruction team of up to 140 personnel in Bamiyan since 2003.

According to the Defence Force, the team is tasked with maintaining security, providing advice and assistance to the provincial governor and the Afghan National Police, and managing New Zealand aid projects in the region.

He obtained copies of confidential reports which reveal the Defence Force has sought to "generate and maintain public support" for the deployment through a "continuous flow" of positive commentary.

This "pro-active strategy" was considered necessary to assure the New Zealand public that Defence Force personnel were "not going to war", that the focus of the mission was reconstruction and that Kiwi Camp was very much a New Zealand operation.

The book, however, questions just how much successful aid and reconstruction work has been carried out by New Zealand soldiers in Bamiyan, quoting one Army commander as saying there was no long-term view of what the provincial reconstruction team was trying to achieve.

Hager also claims that some of New Zealand's SAS soldiers were privately unhappy about being deployed by the current Government in frontline operations in Kabul against suicide bombers and that being used as a signal of National's "pro-American loyalties".

Hager's latest book, which chronicles New Zealand's near-decade long involvement in Afghanistan as part of the post-September 11 "war on terror" and examines the last Labour Government's struggle to stay out of the Iraq war, is the result of interviews with military officers, defence and foreign affairs officials, Beehive-based political staff, intelligence operatives and other insiders.

He also obtained thousands of pages of classified documents from a variety of sources.

The book was delivered to retailers this morning without any prior publicity for fear that authorities might seek a court-imposed injunction to block its sale because of security sensitivities surrounding its contents.

While it is expected that attempts will be made to discredit the book and its author, the veracity of the findings of Hager's previous investigations, which include a landmark expose of New Zealand's security and intelligence organisations in the 1990s, has never come under serious challenge.

His Seeds of Distrust, which covered Labour's political management of the vexed issue of genetic engineering, had a major bearing on the 2002 election campaign.

While both Labour and National may be embarrassed by Hager's findings, Other People's Wars is unlikely to have the same impact on this year's election.

The work is instead highly critical of New Zealand's defence and foreign affairs bureaucracy for crossing the line into politics in its desire to see a resumption of the strong security ties the military enjoyed with the United States and Britain prior to New Zealand's adoption of the anti-nuclear policy in the 1980s.

Other notable features of the book include:

* Defence Force staff responsible for the deployment of Orion aircraft and Anzac frigates to the Gulf in the "war against terror" ignored instructions from then prime minister Helen Clark to keep their operations separate from those being conducted by the United States against Iraq.

The book quotes unidentified officials and former diplomats as agreeing that Clark - lacking a strong defence minister - fought a lone battle against neverending efforts by the Defence and Foreign Affairs ministries to rewrite Government policy and buy military equipment which would enable New Zealand to build bridges with the United States.

* a New Zealand Defence Force signals intelligence officerworking alongside the Americans at Afghanistan's Bagram air base tracked Taliban insurgents in Pakistan which were later the targets of attacks.

* another New Zealand intelligence officer seconded to Bagram joked on his Facebook page about not finding Osama bin Laden but added he had "widowed a few wives, though".

* New Zealand SAS soldiers deployed to Afghanistan in the early stages of the "war on terror" got fed up with the gung-ho "killing terrorists" mentality of the Americans and their treatment of captured or suspected insurgents.

* the Ministry of Foreign Affairs drafted a letter on behalf of the Kabul-based government and got it signed by the Afghan president to maintain the pretence that New Zealand's provincial reconstruction team had been "invited" to come to Afghanistan.

* New Zealand diplomats resorted to underhand tricks when they did not get their way with the last Labour Government.

For example, when Ministry of Foreign Affairs officials did not like a particular Government policy decision, New Zealand's ambassadors in Washington and Canberra were told to sound out the views of the local bureaucrats.

The ministry would then tell Government ministers that the Americans and Australians had made it known they were very concerned and there could be "relationship implications".