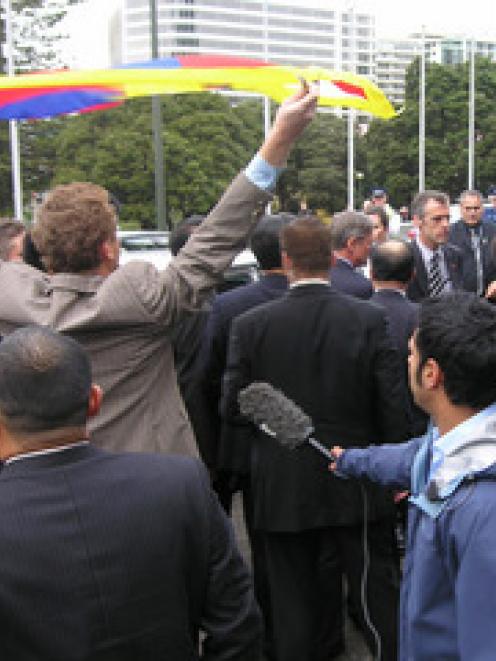 Green Party co-leader Russel Norman was pushed by Chinese officials who tried to put an umbrella over him to hide a Tibetan flag he was waving.

It was pulled from his hands, although he managed to retrieve it and accuse the Chinese of trying to suppress freedom of speech in New Zealand.

Prime Minister John Key apologised to the delegation for the incident, and last night told NZPA the issue had nothing to do with freedom of speech.

He said he apologised for the failure to provide proper security for the vice-president.

"It's my intention, when I return to New Zealand, to take the matter up with Diplomatic Protection, the Ministry of Foreign Affairs and Trade and with the Speaker's office because I think it's unacceptable that a dignitary of that level can't enter the building without their integrity being compromised," he said.

"In my view we will need to go and review our procedures and protocols."

Mr Key said a balance had to be found so visiting leaders could enter and leave the building without their "close space and their integrity" being challenged.

Dr Norman yesterday accused Mr Key of making a "degrading" apology and called on him to stand up for democracy and free speech.

Mr Key said he would always fight to protect those rights for all New Zealanders.

He said the Chinese Falun Gong movement had protested continuously outside the vice-president's hotel in Auckland.