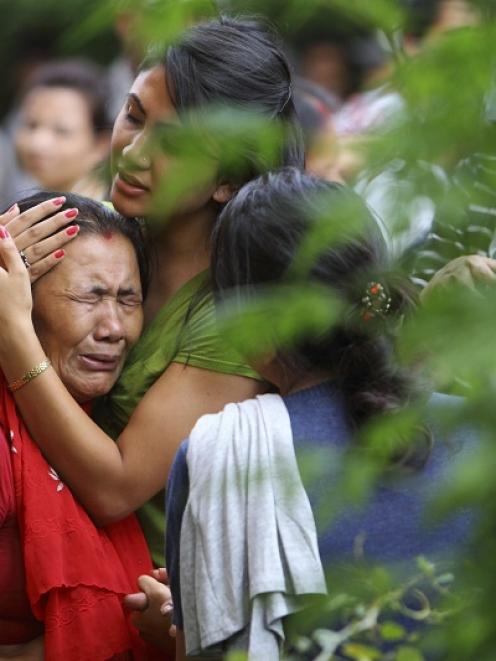 Kathmandu Airport officials said there were 16 passengers and a crew of three on board the plane. The cause of the crash was not known.

"We had rushed a survivor to the hospital but he died during the treatment. So we have all 19 people dead," police spokesman Binod Singh told Reuters.

He said ground rescuers had recovered all bodies but helicopters were unable to land near the crash site due to bad weather.

"Once the helicopters land, we'll bring all bodies to Kathmandu and take them to the Teaching Hospital for post-mortem," Singh said.

A Reuters photographer, who reached the hilltop crash site through a wet and slippery mud road, saw badly damaged bodies of the victims, mobiles, shoes and other belongings scattered on a slope.

The plane has broken into several pieces and black smoke was rising from the debris, he said.

The Beech aircraft owned by Buddha Air, a private airline, was flying to Kathmandu from a mountain flight to Everest.

"The plane was returning to Kathmandu from a mountain flight when it crashed," an official at the Kathmandu airport Rescue Coordination Centre, who refused to be named because he was not authorised to speak to the media, said.

The centre is operated by the Civil Aviation Authority of Nepal.

He said the plane had crashed at Kotdanda, about 5km south of the Nepali capital.

There were 10 Indian and two American, one Japanese , three Nepali passengers and three Nepali crew members, he said.

Kathmandu and its surrounding hills were enveloped in late monsoon clouds early on Sunday.

The last plane crash in Nepal was in December last year, when a Twin Otter aircraft hit the Himalayan foothills of remote west Nepal, killing all 22 people onboard.

Nepal is home to eight of the world's 14 highest mountain peaks, including Mount Everest.

Tens of thousands of hikers and foreign tourists go to Mount Everest and other trekking routes to see the lofty Himalayan peaks every year.

Those who cannot hike the rugged hilly trails to the mountains use mountain flights operated by different airlines to see the Himalayas.

Tourism, a key source of earning for impoverished Nepal, accounts for nearly four percent of the gross domestic product and employs tens of thousands of people, among the poorest in the world.