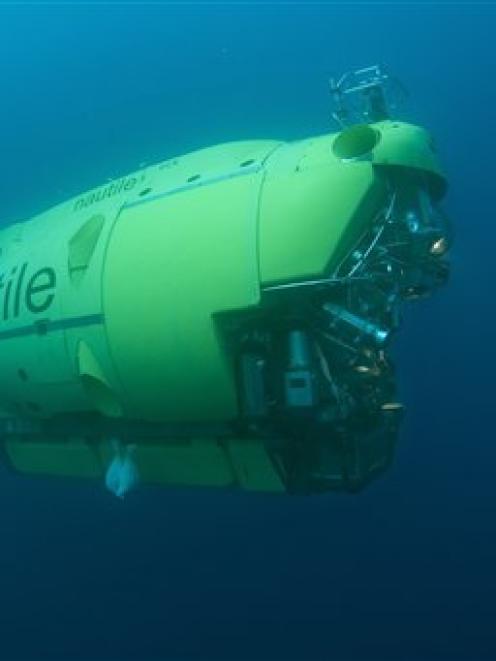 The manned submarine Nautileat, seen here in a file photo, is heading from the Azores and will be in the search zone for the missing Air France plane by June 12. Photo by AP/Ifremer.
Airspeed instruments on Air France Flight 447 were not replaced as the maker recommended before the plane crashed in turbulent weather, the French agency investigating the disaster said today.

The French accident investigation agency, BEA, found the doomed plane received inconsistent airspeed readings by different instruments as it struggled in a massive thunderstorm on its flight from Rio de Janeiro to Paris with 228 people aboard.

No confirmed debris from the aircraft has been found and without its black box recorders, aviation investigators have little information to help them determine what caused the crash.

Airbus had recommended to all its airline customers that they replace speed-measuring instruments known as Pitot tubes on the A330, the model used for Flight 447, said Paul-Louis Arslanian, the head of the agency.

"They hadn't yet been replaced" on the plane that crashed, said Alain Bouillard, head of the French investigation. Air France declined immediate comment.

Arslanian cautioned that it is too early to draw conclusions about the role of Pitot tubes in the crash, saying that "it does not mean that without replacing the Pitots that the A330 was dangerous."

He told a news conference at the agency's headquarters, near Paris that the crash of Flight 447 also does not mean similar plane models are unsafe, adding that he told family members not to worry about flying.

Airbus had made the recommendation for "a number of reasons," he said.

The investigation chief played down the idea that terrorism was involved in the crash, saying "We can't completely close the door at the present time but it seems incoherent with the first facts we have established."

The Pentagon has said there are no signs of terrorism. Brazil's defense minister said the possibility was never considered. French Foreign Minister Bernard Kouchner agreed that there is no evidence supporting a "terrorism theory," but said "we cannot discard that for now."

The investigation is increasingly focused on whether external instruments may have iced over, confusing speed sensors and leading computers to set the plane's speed too fast or slow - a potentially deadly mistake in severe turbulence.

Pitot tubes, protruding from the wing or fuselage of a plane, feed airspeed sensors and are heated to prevent icing. A blocked or malfunctioning Pitot tube could cause an airspeed sensor to work incorrectly and cause the computer controlling the plane to accelerate or decelerate in a potentially dangerous fashion.

Air France has already replaced the Pitots on another Airbus model, the 320, after its pilots reported similar problems with the instrument, according to an Air France air safety report filed by pilots in January and obtained by The Associated Press.

The report followed an incident in which an Air France flight from Tokyo to Paris reported problems with its airspeed indicators similar to those believed to have been encountered by Flight 447. In that case, the Pitot tubes were found to have been blocked by ice.

"Following similar problems frequently encountered on the A320 fleet, preventative actions have already been decided and applied," the safety report says. The Pitots on all Air France's A320s were retrofitted with new Pitots "less susceptible to these weather conditions."

The same report says Air France decided to increase the inspection frequency for its A330 and A340 jets' Pitot tubes, but that it had been waiting for a recommendation from Airbus before installing new Pitots.

Investigators are relying on 24 messages the plane sent automatically during the last minutes of the flight to try to locate the wreckage.

The signals show the plane's autopilot was not on, officials said, but it was not clear if the autopilot had been switched off by the pilots or had stopped working because it received conflicting airspeed readings.

As no confirmed wreckage has been found, concern has grown about whether searchers were even looking in the right place.

"We are alert for everything and are certain today's operation's will provide results," he said.

Visibility and weather conditions have improved in the search area, but debris spotted earlier on the ocean's surface may have sunk by now.

Air force Brig. Gen. Ramon Cardoso told reporters late Friday that the air force would not have the means of finding debris once it had sunk.

Earlier, he insisted the debris spotted - an airplane seat, a slick of kerosene and other pieces - was from the plane. But he confirmed that Brazilian searchers had yet to recover any of the material. Searchers did not pursue the debris reports then because priority was given to the hunt for survivors or bodies.

Meanwhile, a German government-owned satellite spotted debris in the Atlantic on Wednesday, German Aerospace Center spokesman Andreas Schutz said, but he added it was unclear whether the material came from the plane.

The flight disappeared nearly four hours after takeoff, killing all on board. It was Air France's deadliest plane crash and the world's worst commercial air accident since 2001.

The head of France's weather forecasting agency, Alain Ratier, said weather conditions at the time of the flight were not exceptional for the time of the year and region, which is known for violent stormy weather.

On Thursday, European plane maker Airbus sent an advisory to all operators of the A330 reminding them of how to handle the plane in conditions similar to those experienced by Flight 447.

Peter Goelz, a former managing director of the National Transportation Safety Board, said that advisory and the Air France memo about replacing flight-speed instruments "certainly raises questions about whether the Pitot tubes, which are critical to the pilot's understanding of what's going on, were operating effectively."

Arslanian said it is vital to locate a small beacon called a "pinger" that should be attached to the cockpit voice and data recorders, now presumed to be deep in the Atlantic.

"We have no guarantee that the pinger is attached to the recorders," he said.

Holding up a pinger in the palm of his hand, he said: "This is what we are looking for in the middle of the Atlantic Ocean."

Investigators are trying to determine the location of the debris in the ocean based on the height and speed of the plane at the time the last message was received. Currents could also have scattered debris far along the ocean floor, he said.

President Barack Obama said at a news conference with French President Nicolas Sarkozy Saturday that the United States had authorized all of the U.S. government's resources to help investigate the crash.

Arslanian said U.S. forces have lent the inquiry acoustic systems, which will be fitted to two naval vessels. That is in addition to France's Emeraude submarine and the high-tech equipment being send to the region by French marine research institute Ifremer.

Laurent Kerleguer, an engineer specialized in the ocean floor working with the investigation team, said the zone seen as the most likely site of the debris was 15,112 feet (4,606 meters) at its deepest point and 2,835 feet (864 meters) at its shallowest.

France's submarine, to arrive next week, will try to detect signals from the black boxes, said military spokesman Christophe Prazuck.