Austrian author Peter Handke at his home in Chaville, near Paris. Photo: Reuters
Austrian Peter Handke has won the 2019 Nobel Prize for Literature and Poland's Olga Tokarczuk was named as the 2018 winner after a sexual assault scandal led to last year's award being postponed.

The Swedish Academy which chooses the literature laureate said it had recognised Handke (76), for a body of work including novels, essays and drama "that with linguistic ingenuity has explored the periphery and the specificity of human experience."

Tokarczuk (57) won for "a narrative imagination that with encyclopaedic passion represents the crossing of boundaries as a form of life," it said.

Both have courted controversy - Handke for his portrayal of Serbia as a victim during the Balkan wars and for attending its leader's funeral, and Tokarczuk for touching on dark areas of Poland's past that contrast with the version of history promoted by the country's ruling nationalist party.

While Tokarczuk's agent said the award should not be seen in the context of a parliamentary election Poland will hold on Sunday, the author called on Poles to "vote in a right way for democracy".

"The prize goes to eastern Europe, which is unusual, incredible," Tokarczuk told a press conference in the German town of Bielefeld.

"It shows that despite all those problems with democracy in my country we still have something to say to the world."

On winning a Polish literary award in 2015 for The Book of Jacob, which deals with Poland's relations with its Jewish minority and neighbouring Ukraine, she outraged nationalists with her comments and received death threats.

Two prizes were awarded this year after last year's award was postponed over the scandal that led to the husband of an Academy member being convicted of rape.

Since then, the organisation has appointed new members and reformed some of its more arcane rules after a rare intervention by its royal patron, the king of Sweden. 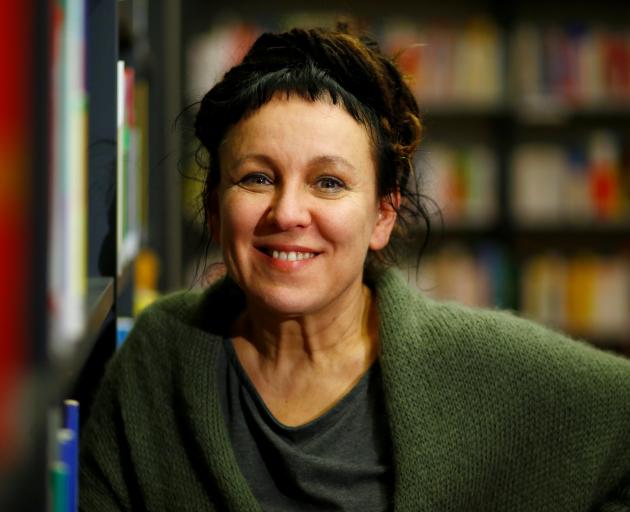 Handke, a native of the Austrian province of Carinthia, which borders Slovenia, established himself as one of the most influential writers in Europe after World War 2, the Academy said. He also co-wrote the script of the critically-acclaimed 1987 film Wings of Desire.

The author of books such as The Goalie's Anxiety at the Penalty Kick and Slow Homecoming, he attracted widespread criticism after he attended the funeral of former Yugoslav President Slobodan Milosevic in 2006.

An estimated 10,000 ethnic Albanians were killed in Kosovo and almost 1 million were put to flight during a brutal war waged by forces under Milosevic in 1998-99.

"Have we become so numb to racism, so emotionally desensitised to violence, so comfortable with appeasement that we can overlook one's subscription&service to the twisted agenda of a genocidal maniac?," Vlora Citaku wrote on Twitter.

"We must not support or normalize those who spew hatred. We can do better!#Nobel."

Handke, visibly moved, said he was surprised to be awarded the prize.

"I was astonished, yes. It was very courageous by the Swedish Academy, this kind of decision," he told reporters at his home in the small town of Chaville outside Paris. "These are good people."

"I feel a strange kind of freedom, I don't know, a freedom, which is not the truth, as if I were innocent," he said.

Handke appeared to have given up the idea of winning the world's top literary prize. He told the New York Times in 2006 he no longer cared and added: "Now I think it's finished for me after my expressions about Yugoslavia."

In 2014, he told Austrian daily Die Presse that "the Nobel Prize should be abolished" and that winning brings "false canonization".

Lojze Wieser, a publisher in Carinthia who has done several projects with Handke in German and Slovenian, told Reuters that no one had expected Handke's victory.

"He is the greatest innovator of language and word in global literature," Wieser said.

Tokarczuk trained as a psychologist before publishing her first novel in 1993. Since then, she has produced a steady and varied stream of works and her novel "Flights" won her the high-profile Man Booker International Prize last year. She was the first Polish author to do so.

"Nobel Prize for Literature! Joy and emotion took my speech away. Thank you very much for all your congratulations!" she wrote on Facebook.

She later told Polish broadcaster TVN she was proud that her books covering small towns in Poland can be read universally and be important for people elsewhere in the world.

"I believe in the novel. I think the novel is something incredible. This is a deep way of communication, above the borders, above languages, cultures. It refers to the in-depth similarity between people, teaches us empathy," she said.

Poland's culture minister, Piotr Glinski, said the award to Tokarczuk was a success for Polish culture. Earlier this week, Glinski said he had started reading Tokarczuk's books many times but never finished any of them, a failing that he said on Twitter he would now seek to correct.