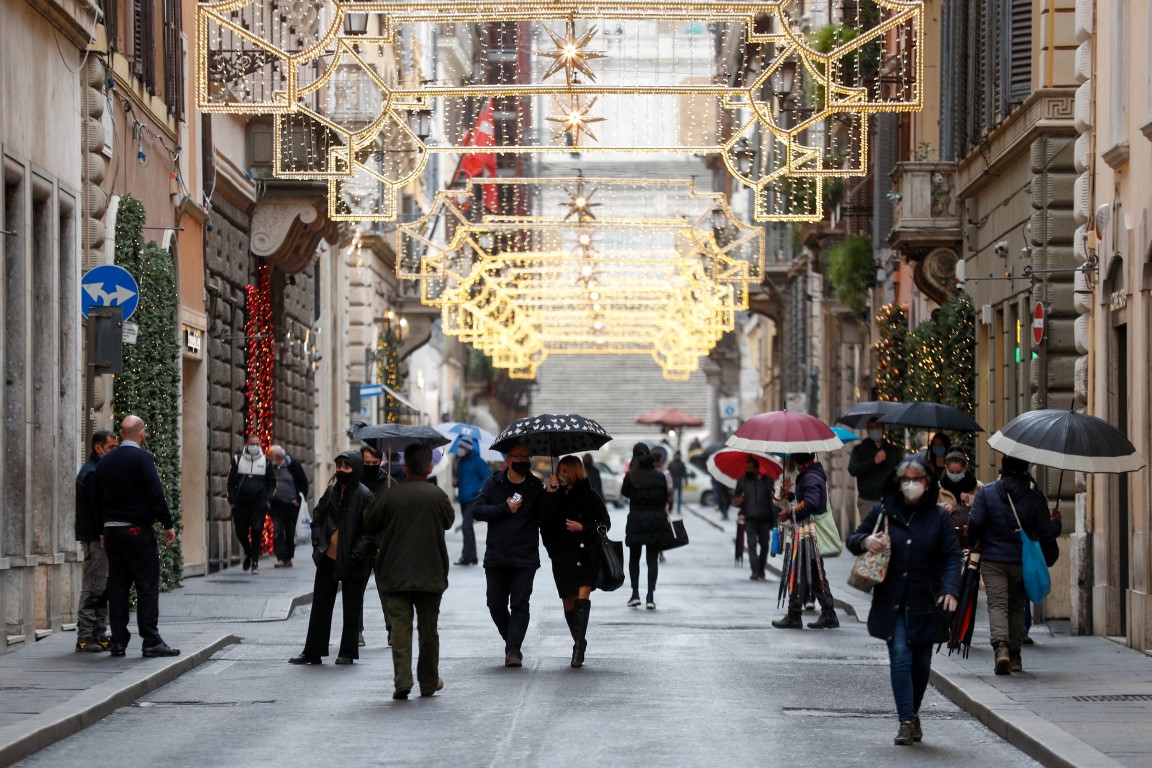 People wearing protective masks walk along Rome's Via dei Condotti on the day the Italian government announced plans for mass coronavirus vaccinations and restrictions over the Christmas period. Photo: Reuters
Italians will not be able to attend midnight mass or move between regions over the Christmas period, as the country battles high coronavirus infection rates and deaths.

Italy has been reporting more daily Covid-19 fatalities than any other European nation in recent weeks and, while the increase in new cases and hospital admissions is slowing, the government is worried about gatherings over Christmas.

Junior Health Minister Sandra Zampa said Christmas Eve mass must end by around 8:30pm so that worshippers can return home before a 10pm curfew, and people should not invite non-family members home for Christmas lunch or other celebrations.

"From December 20, people will only be able to travel outside their own region for emergencies such as to care for a single parent," she said in an interview with private television channel La7.

The government has already said ski resorts will be closed over the Christmas and New Year period.

The cabinet was meeting late on Wednesday (local time) to decide the details of restrictions over coming weeks, which Prime Minister Giuseppe Conte is expected to outline at a news conference on Thursday.

The existing restrictions, which have put much of the industrial north under partial lockdown and limited business activity, are due to expire on Thursday.

Italy saw 684 coronavirus-related deaths on Wednesday, down from 785 on Tuesday, and 20,709 new infections, the health ministry reported earlier.

The first Western country hit by the virus, Italy has seen 57,045 Covid-19 fatalities since its outbreak emerged in February, the second-highest toll in Europe after Britain's. It has also registered 1.642 million cases.

Health Minister Roberto Speranza said on Wednesday the government had options to buy 202 million Covid-19 vaccine shots from various companies and was awaiting clearance for their usage from European Union drug authorities.

"We finally see land, we have a clear route to a safe harbour... It seems likely that from January we will have the first vaccines," Speranza told the upper house Senate.

He said the main part of the Italian vaccine campaign would be conducted between spring and summer 2021, with health workers, elderly people and those living in nursing homes getting the first shots, and the army involved in distribution.