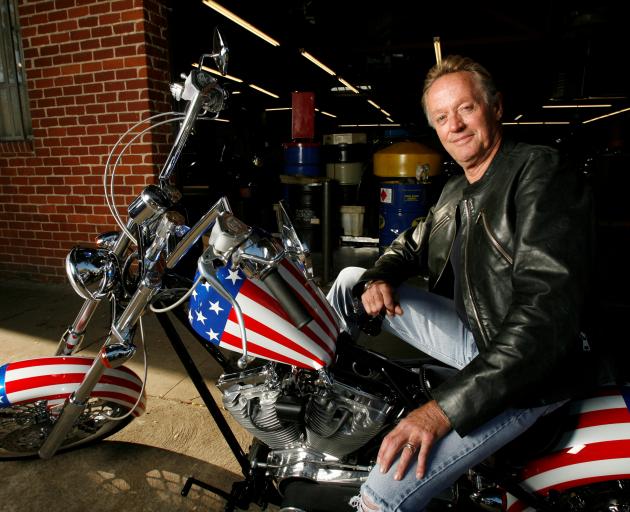 Fonda poses for a portrait on a replica of the "Captain America" bike from 'Easy Rider' . Photo: Reuters
Oscar nominated actor Peter Fonda, who played a cool and introspective motorcyclist in the 1969 film Easy Rider that captured the spirit of the era's counterculture movement, died on Friday (local time) at age 79, his family said in a statement.

Fonda, the son of Hollywood leading man Henry Fonda and the brother of Jane Fonda, died at his home in Los Angeles on Friday morning of respiratory failure from lung cancer, the statement said.

"It is with deep sorrow that we share the news that Peter Fonda has passed away," it said, adding: "In honour of Peter, please raise a glass to freedom."

"While we mourn the loss of this sweet and gracious man, we also wish for all to celebrate his indomitable spirit and love of life," the family said.

Fonda played the wanderer Wyatt in "Easy Rider," opposite the late Dennis Hopper who co-starred as fellow biker Billy and directed the film.

In the movie, Wyatt and Billy set out on their motorbikes to discover America and have a number of misadventures, befriending an attorney played by Jack Nicholson, before meeting violent deaths.

"Easy Rider," with a script co-written by Fonda, helped usher in a period known as the "New Hollywood" era of filmmaking, which often avoided happy endings and other conventions of the Hollywood studio system.

Fonda was nominated for an Academy Award for his work on the script of "Easy Rider" and went on to act in movies and television shows at a steady pace in the decades after, achieving a second career highlight when he was nominated for a best actor Oscar for his role as a beekeeper in the 1997 drama "Ulee's Gold."

His other notable film appearances included supporting roles in the remake of the western "3:10 to Yuma" and the action-fantasy "Ghost Rider," which both came out in 2007.

Jane Fonda, who is known for her role in the 1968 film "Barbarella" and in the ongoing Netflix series "Grace and Frankie," expressed sadness at her brother's death.

"He was my sweet-hearted baby brother. The talker of the family," she said in a statement. "I have had beautiful alone time with him these last days. He went out laughing."