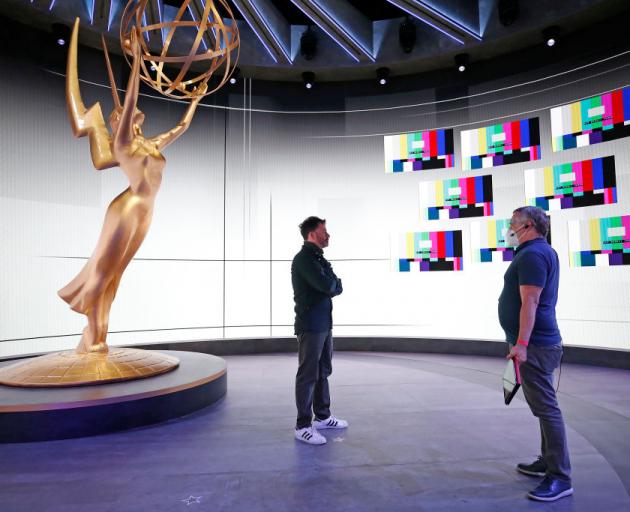 Jimmy Kimmel will host from a stage in the Staples Center in downtown Los Angeles, telling jokes without the usual packed audience of celebrities. Only production staff and a handful of stars will be allowed in. The red carpet was cancelled.

Hoping to avoid the feel of a stilted Zoom call, staff shipped dozens of movie-quality cameras, lights and microphones to capture live and spontaneous reactions from winners in their living rooms.

"They don't want it to be the 'Zoomies,'" said Michael Schneider, senior editor at Variety. "They want to avoid that look, and have it look like a regular production."

Television audiences for awards shows have slumped in recent years. Last year's Emmys drew a record-low viewership of 6.9 million in the United States. Producers hope the unpredictability of this year's format will draw interest, and they admit things might go wrong.

"Think about having a Zoom with your family and how complicated that is, getting grandma to look at the camera and have her whole face on camera," Kimmel quipped in a promotional video. "Multiply that by a million, and that's what we're dealing with here."

A line-up of "special guests" including Oprah Winfrey, Sterling K. Brown and Jason Bateman is slated to appear in some form. Casts of some series will gather together to watch the broadcast.

"Some are going to work and it's going to be great," he said. "Some of them might not work. We said 'let's just experiment.'"

Breanne Heldman, senior TV editor for People magazine, believes the unusual setup will yield surprises and a side of celebrities not normally seen on television.

"I think there could end up being some really beautiful, touching and romantic moments with people thanking the people sitting right next to them on the couch," she said. "It will be intimate and honest."

While the lack of a red carpet will disappoint many fans, Heldman expects stars will don notable attire throughout the show. Some may wear masks that match their outfits, which could range from sweatpants or pyjamas to high fashion, she said.

"There will be some women who don't want to pass up on this big moment and wear the gown," Heldman said. "And why not? Put on those Jimmy Choos. You don't have to walk around in them."

Television proved an escape for millions during the lockdowns but many of the shows up for Emmys are far from frivolous in a line-up that is stronger than ever on diversity.

Watchmen based on a comic book but infused with themes of racial injustice, goes into the ceremony with a leading 26 nods and is expected to end up one of the night's biggest winners.

"It's big in scope, and its message of institutional racism and diving deep into this country's history of inequality couldn't be more timely," said Schneider.

"It's strange in this day and age to see people rooting and caring so much for rich white people, but there is also a thrill in watching them squirm," said Hall, talking of Succession.

Both shows, which tied with 18 Emmy nods, "benefited from all the binge watching that people did during quarantine," Hall added.

By contrast Schitt's Creek, a leading contender for best comedy series honours, is a quirky feel good show about a rich family forced to live in a run-down motel. It also got nods for writing, directing and for its four main actors - Eugene Levy, Catherine O'Hara, Daniel Levy and Annie Murphy.

Previous Emmy champ The Marvelous Mrs Maisel is also in the running but sentiment appears to be with Schitt's Creek, which went from obscurity to a fan favourite in its 6th and final season.