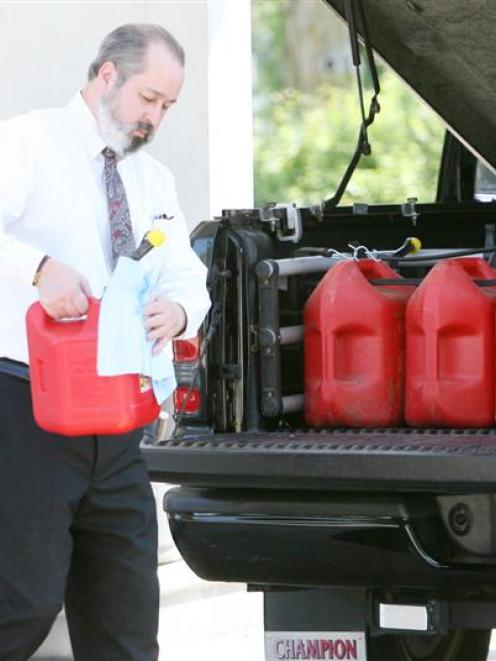 John McDonnell of Biloxi, Mississippi, stocks up on gasoline in anticipation of Tropical Storm Gustav becoming a hurricane and affecting southern Mississippi. (AP Photo/John Fitzhugh, Sun Herald)
With Gustav approaching hurricane strength and showing no signs of veering off a track to slam into the Gulf Coast, authorities across the region began laying the groundwork to get the sick, elderly and poor away from the coastline.

The first batch of 700 buses that could ferry residents inland was being sent to a staging area near New Orleans, and officials in Mississippi were trying to decide when to move Katrina-battered residents along the coast who were still living in temporary homes, including trailers vulnerable to high wind.

The preliminary planning for a potential evacuation is part of a massive outline drafted after Hurricane Katrina slammed ashore three years ago, flooding 80 percent of New Orleans and stranding thousands who couldn't get out in time.

As the region prepared to mark the storm's anniversary Friday, officials said they were confident those blueprints made them ready for Gustav.

"There are a lot of things that are different between now and what we faced in 2005 when Katrina came ashore," said U.S. Homeland Security Secretary Michael Chertoff, who flew to Louisiana to meet with New Orleans Mayor Ray Nagin and Gov. Bobby Jindal. "We've had three years to put together a plan that never existed before."

With Gustav still several days away, authorities cautioned that no plans were set in stone and that they had not yet called for residents to leave.

Projections showed the storm arriving early next week as a Category 3 storm, with winds of 111 mph (178 kph) or greater, anywhere from the Florida Panhandle to eastern Texas. But forecasts are extremely tentative several days out, and the storm could change course.

Governors in Mississippi, Louisiana and Texas pre-declared states of emergency in an attempt to build a foundation for federal assistance. Batteries, bottled water, and other storm supplies were selling briskly. Roughly 3,000 National Guard troops were on standby in Louisiana, and an additional 5,000 were readying in Texas.

Meanwhile, Union Pacific, the nation's largest railroad, was redirecting rail traffic from New Orleans to two other cities in preparation for a possible landfall by Gustav.

Hotels in the coastal region reported being booked solid by coastal residents planning ahead.

"We're almost sold out," said Sheila Harris, the administrative assistant at the Comfort Inn in Tupelo, Mississippi, which is about 482km inland from the Mississippi coast. She said most of the 83 rooms at the hotel had been booked by New Orleans and southern Mississippi residents.

Many residents found themselves repeating the same things they did in the days before Katrina. The New Orleans Saints were set to play the Miami Dolphins in the team's final NFL preseason game Thursday night; the Saints played their final game of the 2005 preseason just three days before Katrina. Running back Deuce McAllister, who was planning to shore up his suburban home, found it a little weird to be preparing for a possible storm again.

"It's out of our hands," said McAllister. "We'll just have to wait and see what happens."

The city was expected to announce later Thursday whether officials would go ahead with programs to mark the Katrina anniversary. Among the events that have been planned are a jazz funeral to bury remains of unidentified Katrina victims and a candlelight vigil at Jackson Square.

If a Category 3 or stronger hurricane threatens, New Orleans plans to institute a mandatory evacuation order. Depending on the churn of this system, the call could come with a slow-moving Category 2, the city's emergency preparedness director, Jerry Sneed, said.

Nagin said in interviews Wednesday that the clock on an evacuation would start three days, or 72 hours, from an anticipated landfall.

Hurricane-seasoned officials also were hoping for the chance forecasts were wrong. Joey Durel, president of Lafayette's city and parish governments, said officials in that south-central Louisiana community may begin handing out sandbags to residents as early as Friday - but hoped they wouldn't need them.

"We're glad to see we're in the (forecast) path because they never get it right this far out," Durel said. "I say that slightly tongue in cheek, but it's true." 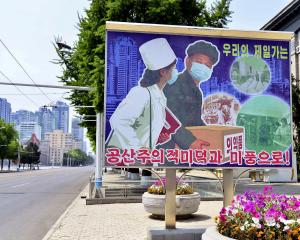 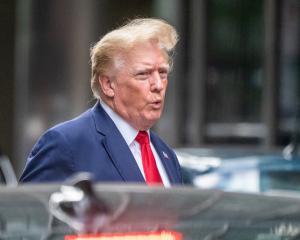