Istanbul protesters in solidarity with Kurds 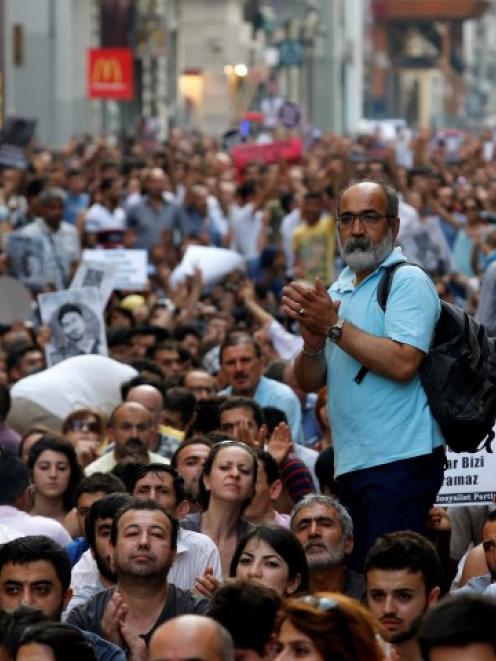 The protest had been planned as part of larger unrelated anti-government demonstrations that have swept through the country since the end of May, but became a voice of solidarity with the Kurds after Friday's killing (local time).

"Murderer police, get out of Kurdistan!" some protesters chanted. "This is only the beginning, the struggle continues. The murderer state will pay!"

Turkish forces killed the man and wounded 10 others when they fired on a group protesting against the construction of a gendarmerie outpost in the Kurdish-dominated region.

The incident, in the Lice district of Diyarbakir province, appeared to be the most violent in the region since a ceasefire declaration in March by jailed Kurdish rebel chief Abdullah Ocalan in a decades-old conflict between his fighters and the Turkish state, and it risks derailing the nascent peace process.

Around 10,000 protesters descended on Taksim, which has been the centre of weeks of anti-government demonstrations, but were prevented from entering the square by riot police.

Many in the crowd sat in the roads leading to the square after being denied entry. "Long live the brotherhood of the people!" people shouted in both Turkish and Kurdish.

Most of the protesters dispersed after a couple of hours, with a group of around 1,000 remaining near the square. Riot police pushed them away from the square with shields and slow moving water cannon trucks although no water was fired. Announcements were made for protesters to return to their homes.

The Kurdish tensions come at a time of increased vigilance among Turkish security forces after the anti-government protests in Istanbul, Ankara and other cities in which four people have died and thousands have been injured.

The protests, which had largely died down over the past week, have emerged as the biggest public challenge to Prime Minister Tayyip Erdogan's 10-year rule. He has dismissed the protesters as pawns of Turkey's enemies and has called supporters to back his party in municipal elections next year.

Earlier, hundreds of Kurds chanted anti-government slogans at the funeral of 18-year-old Medeni Yildirim, raising fears of violence at protest marches around the country on Sunday called by Turkey's main pro-Kurdish Peace and Democracy Party (BDP).

The mourners in the city of Diyarbakir warned Erdogan to respect the peace process.

"Behave, Erdogan, don't push us to the mountains!" they chanted - a reference to the camps of Ocalan's Kurdistan Workers Party (PKK) in the mountains of northern Iraq from where they used to attack targets within Turkey.

Erdogan tried on Friday to reassure Turkey's Kurds that the anti-government would not harm the peace process.

"The peace process was not affected ... and our brotherhood grew stronger thanks to our people's common sense," he said.

Turkey's Interior Ministry said inspectors would investigate Friday's incident, which it said had involved up to 250 people attacking the construction site. It said the death resulted from warning shots fired to disperse the crowd.

Hours before the killing, the BDP called for marches in three major cities on Sunday to launch a summer of protests to raise pressure on Ankara for reforms under the peace process with the PKK. Leaders said the rallies would be peaceful.

PKK militants began withdrawing from Turkish territory to bases in northern Iraq last month as part of the deal between the state and Ocalan, imprisoned on an island south of Istanbul since 1999, to end a conflict that has killed 40,000 people.

There has been little evidence of progress with attention focused on the countrywide protests.

But the BDP has said the withdrawal was continuing successfully and the process had entered a second stage during which Ankara needed to broaden the rights of Kurds, who make up some 20 percent of the 76 million population.

The BDP protests will call for a halt to the construction of military outposts, the release of political prisoners, education in Kurdish, lowering of the threshold of 10 percent electoral support required to enter parliament, and the release of Ocalan.

The PKK, designated a terrorist group by Turkey, the United States and European Union, took up arms against the state in 1984 with the aim of carving out a Kurdish state, but subsequently moderated its goal to autonomy.