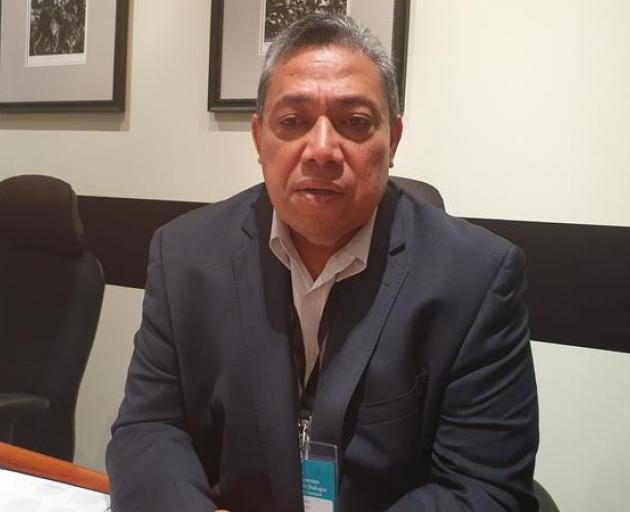 Chief executive of Tonga's Ministry of health Dr Siale Akauola. Photo: RNZ
Tonga's Prime Minister is urging people on the main island of Tongatapu to use the weekend to prepare for a potential lockdown next week after the Kingdom's first Covid-19 case was confirmed.

The positive case was a passenger on a repatriation flight from Christchurch with 215 other people on Wednesday.

The passengers from the Christchurch flight are quarantined in the Tanoa Hotel, Nuku'alofa.

Matangi Tonga online reports the prime minister announced at a press conference that we should use this time to get ready in case more people are confirmed they have the virus.

The Minister of Health, Dr 'Amelia Tu'ipulotu and the Prime Minister Reverend Dr Pohiva Tu'ionetoa, held a Covid-19 press conference in the capital, Nuku'alofa on Friday.

The Ministry of Health's CEO Dr Siale 'Akau'ola explained that if the Covid-19 virus entered a person, that person couldn't spread it right at that time, the virus needed time to grow and that person would become infectious three to five days after contracting it.

"Front-liners should be safe because even if say the [quarantine bus] driver returned home that night, and whether he wore PPE or not, if he contracted the virus then there is that incubation period where it grows, becoming infectious three or more days after. That is why I think they are alright," 'Akau'ola said.

He said when they got the news just before midnight of two positive community cases in Christchurch, they had informed the front-liners involved and they self-isolated at home.

Then after the Covid-19 positive test was confirmed yesterday in Tonga, the frontliners were also taken into quarantine.

"So, we have acted swiftly in just a day," he said. "Our front-liners are trained and have been fully vaccinated."

Health officials say the passenger who tested positive to Covid-19 was inoculated with the first dose of the Pfizer BioNTech vaccine in the last week of September, and had received a second dose in mid-October.

"So the person is fully vaccinated and their protection level will be up two weeks after this second shot," 'Akau'ola said.

"We are satisfied despite this person being positive, we believe the person would not get seriously ill and reach a dangerous level."

Meanwhile, it has not been confirmed if the Covid-19 virus is the Delta variant, which spreads easily.

"When there is a Covid-19 positive case we can assume it's Delta, then confirm later," he said.

People can still get their Covid-19 vaccinations over the weekend including on Sunday.

Dr 'Akau'ola confirmed health will still be providing vaccinations even if there is a lockdown.

Meanwhile, New Zealand's Ministry of Health confirmed that the case had returned a negative pre-departure test before leaving New Zealand and was fully vaccinated and had their second dose on 15 October.

Passengers on the flight including members of Tonga's Olympic team who had been stranded in Christchurch, were required to provide a negative Covid test result at least 72 hours before boarding.

They also had to show vaccination cards prior to the flight, with dates for first and second doses.

The Olympic team were double vaccinated before they departed Tonga for the Olympic Games in Japan.