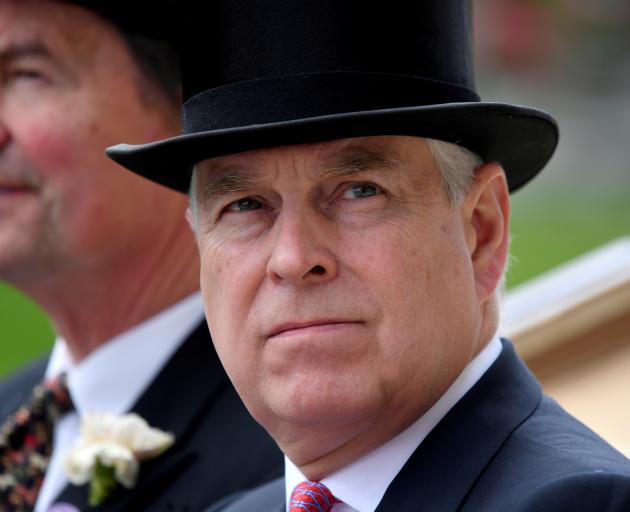 Epstein (66) committed suicide in a Manhattan jail cell earlier this month while being held on sex-trafficking charges.

"The Duke of York has been appalled by the recent reports of Jeffrey Epstein’s alleged crimes," Buckingham Palace said in a statement.

"His Royal Highness deplores the exploitation of any human being and the suggestion he would condone, participate in or encourage any such behaviour is abhorrent," the Palace said.

British media including the Daily Mail published a picture which it said showed Andrew, the second son of the Queen, waving goodbye to a woman from inside a Manhattan mansion owned by Epstein.

The Mail said the picture had been taken in 2010 - two years after Epstein pleaded guilty to a Florida state felony prostitution charge and registered as a sex offender.

The woman has been identified as Katherine Keating, the daughter of former Australian Prime Minister Paul Keating.

US court papers have previously shown that Epstein had socialised with Andrew and other high-profile figures including US President Donald Trump and former president Bill Clinton.

Epstein first came under investigation in 2005 after police in Palm Beach, Florida, received reports he had sexually abused underage girls in his mansion there.

By 2007, Epstein was facing a potential federal indictment for sexually abusing dozens of girls between 1999 and 2007.

Epstein struck a deal, however, to plead guilty in 2008 to the Florida state felony prostitution charge, and register as a sex offender.

Meanwhile, three women on Tuesday sued the estate of Jeffrey Epstein, saying they were sexually abused by the financier, both before and after the widely criticised 2007 plea deal that allowed him to avoid federal prosecution for sex crimes.

The lawsuits, filed in Manhattan federal court, bring to at least five the total number of civil cases against Epstein's estate since his apparent suicide in jail on August 10.

Two of the women, "Katlyn Doe" and "Lisa Doe," met Epstein when they were 17, and the third, "Priscilla Doe," when she was 20, according to the lawsuits. All said Epstein used a "vast enterprise" of associates to recruit them, subject them to unwanted sex acts and keep them under his control.

All three said the abuse continued after Epstein reached a deal with federal prosecutors in Florida in 2007. The deal allowed him to plead guilty to state prostitution charges and spend 13 months in a county jail, during which he was allowed to leave during the day on work release.

The lawsuits said Epstein had Katlyn and Priscilla flown to Florida so he could continue to abuse them even while he was on work release from jail. He made Katlyn feel dependent by promising to pay for medical treatment she needed, according to her lawsuit.

He exerted control over Lisa and Priscilla by promising, falsely, to advance their dance careers, their lawsuits said.

The lawsuit by Katlyn alleges that in 2013, Epstein forced her to marry one of his associates who needed the arrangement to become a legal resident of the US.

A lawyer for the executors of the estate could not immediately be reached for comment.

Epstein was arrested on July 6 and pleaded not guilty to charges of sex trafficking involving dozens of underage girls as young as 14. He died on August 10 in his jail cell and a post-mortem report released on Friday concluded that he hanged himself.

Just two days before, Epstein had signed a will placing all of his property, worth more than $US577 million ($NZ899 million) , in a trust called The 1953 Trust after the year of his birth, according to a copy of the document seen by Reuters.

The will was filed on Thursday in Superior Court of the US Virgin Islands, where Epstein was domiciled, according to a stamp on the document and a statement sent to Reuters on behalf of Epstein's estate.

According to the petition to the court, Epstein's personal property included some $US56 million in cash, $US18 million in planes, cars and boats, and nearly $US200 million in hedge funds and private equity investments.

Epstein's death at the jail triggered multiple investigations and had prompted U.S. Attorney General William Barr to criticise "serious irregularities" at the facility, and to remove the acting chief of the federal Bureau of Prisons.

Barr has said that an investigation of Epstein's crimes, including possible co-conspirators, is continuing.