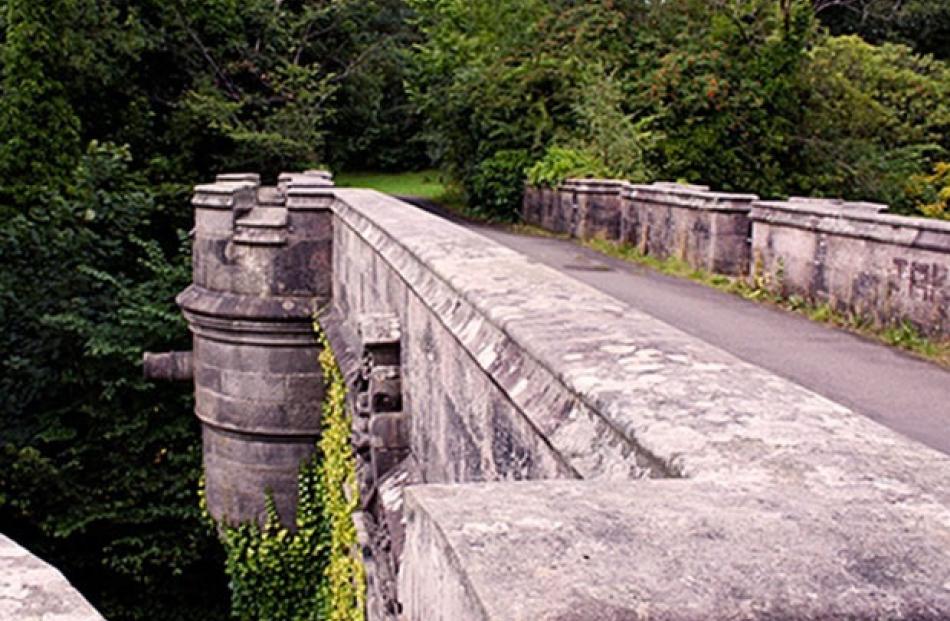 A series of tragic events haunt the otherwise-picturesque Overtoun Bridge near Dumbarton, Scotland, leading many to rename it the "Bridge of Death."

In the past fifty years, as many as fifty dogs have leaped to their deaths from the bridge, while people have also jumped and survived the nearly fifty-foot plunge to the rocks below.

The animals all leap from the same spot-between the final two parapets on the right-hand side of the historic bridge. Almost all have happened on clear and sunny days, which are relatively rare for the western side of Scotland.

All of the dogs that jumped have been long-nosed breeds such as collies, Labradors, and other retrievers. Stranger still: Of the animals that survived their leap, some have returned and attempted to jump again.

Whatever mysterious force drives these dogs to leap from Overtoun Bridge, it doesn't seem to influence just animals.

In 1994, 32-year-old Kevin Moy threw his infant son Eoghan from the bridge on a sunny day in October. The child was killed instantly, and Kevin Moy tried to follow, though he was restrained by his wife and taken to the nearby Overtoun House. There, he attempted to slash his wrists with a kitchen knife before being taken into custody.

Moy, who had been suffering from depression since contracting Myalgic Encephalopathy eight years before, believed that he was the anti-Christ and that his infant son was Satan. He told police that he and the child were responsible for the Gulf War, and they would destroy the world by infecting humanity with a virus. He said that by killing his son and himself, he would be saving the world.

A jury found Moy not guilty by reason of insanity, and he was ordered to be detained in the State Hospital at Carstairs. Yet while Moy's illness may have been what drove him to commit this terrible act, the location and timing of the attempted murder-suicide-a clear, sunny day on the Overtoun Bridge-only fueled to the locale's sinister reputation.

While Overtoun Bridge and nearby Overtoun House have long endured rumors of supernatural happenings-in local Celtic myth, the area is said to be a "thin place" where the spirit and material worlds are particularly close-many dog lovers remain unsatisfied with spectral explanations for the rash of canine suicides.

A psychic named Mary Armour went so far as to take her own Labrador for a walk across the bridge and reported no unusual sensations, only a sense of "calmness and serenity," though she admitted that her dog did pull toward the right side of the bridge.

Others have gone looking for more material explanations for the strange behaviors of dogs on the bridge. Some suggest the suicides are caused by a sound only audible to canines, possibly related to an acoustic anomaly in the bridge's construction.

Subscribers to the theory also point to the nearby telephone pylons or the nuclear base at Faslane as the source of the sound. Acoustic experts, meanwhile, failed to find any unusual tones that might explain the deaths.

David Sexton, an animal habitat expert from the Royal Society for the Protection of Birds, offers up his own solution the mystery. Sexton discovered that 70% of dogs tested among the breeds known to jump from Overtoun Bridge react strongly to the odor of minks, animals that might be scrambling across the rocks below. This could also explain the timing of the deaths, as the smell of the minks would be strongest on dry days when damp weather doesn't interfere.

While the theory is adequate for some, others remain unconvinced. They point to the unanswered questions surrounding the old bridge, like why all the deaths occur between the same two parapets, and why dogs don't leap to their deaths off other bridges in pursuit of minks.

In spite of its beauty, the bridge remains a grim place for many pet lovers. Locals, too, have taken note of the mystery flowing beneath Overtoun. The site now bears a sign that warns approaching visitors to rein in their pets: "Dangerous bridge - Keep your dog on a lead."