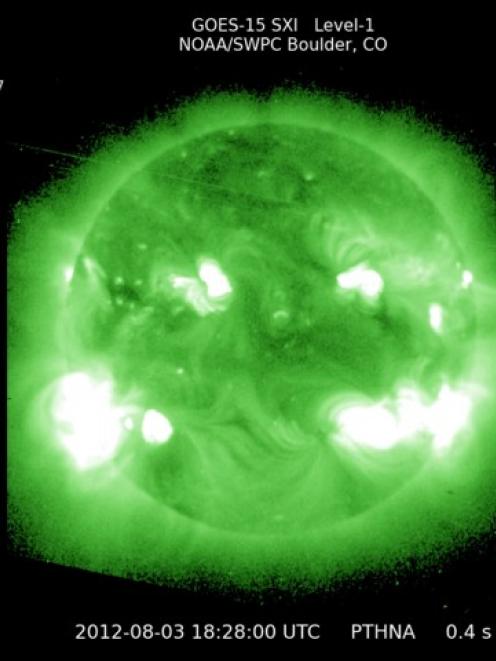 NASA and NOAA's Geostationary Operational Environmental Satellite Solar X-ray Image shows the Sun in this recent image. REUTERS/NOAA/Handout
US weather has been lousy this year, with droughts, heat and killer storms. But a solar superstorm could be far worse.

A monster blast of geomagnetic particles from the sun could destroy 300 or more of the 2,100 high-voltage transformers that are the backbone of the US electric grid, according to the National Academy of Sciences (NAS). Even a few hundred destroyed transformers could disable the entire interconnected system.

There is impetus for a group of federal agencies to look for ways to prepare for such a storm this year as the sun moves into an active period called solar maximum, expected to peak in 2013.

US experts estimate as much as a 7 percent chance of a superstorm in the next decade, which seems a slight risk, but the effects would be so wide-ranging - akin to a major meteorite strike - that it has drawn official concern.

Power blackouts can cause chaos, as they did briefly in India when more than 600 million people lost electricity for hours on two consecutive days in July. However, the kind of long-duration outage that might happen in the case of a massive solar storm would have more profound and costly effects.

There is disagreement on how costly the damage would be, but experts in the US government and industry acknowledge it is a complex problem requiring a coordinated solution.

A report by the NAS estimated that about 365 high-voltage transformers in the continental United States are at risk of failure or permanent damage requiring replacement in the event of a solar superstorm.

NO POWER FOR A YEAR?

Replacements might not be available for a year or more, and the cost of damage in the first year after a storm could be as high as $2 trillion, the report said. The most vulnerable areas are the eastern one-third of the country, from the Midwest to the East Coast, and the Northwest, as far east as Montana and Wyoming and as far south as California.

The national grid was built over decades to get energy at the lowest price from where it is generated to where it is used. A solar superstorm has the capacity to bring that network down, the academy's report said.

"Historically large storms have a potential to cause power grid blackouts and transformer damage of unprecedented proportions, long-term blackouts and lengthy restoration times, and chronic shortages for multiple years are possible," the report said.

Richard Andres, an energy and environmental security expert at the military's National Defense University (NDU), is helping to coordinate an interagency group to deal with the problem. The failure of the national power grid could be disastrous, he said.

In a worst-case scenario, commerce would almost instantly cease, he said, noting he was speaking for himself and not the US government. Water and fuel, which depend on electric pumps, would stop flowing in most cities within hours, modern communications would end and mechanized transport would stall.

BACKUP POWER WOULD BE VULNERABLE

Backup generators for hospitals, the military and other critical facilities would be vulnerable if they depended on diesel or natural gas, which also rely on pipelines for resupply. Law and order might break down if the outage was prolonged, as officers might leave their posts to protect their own families, Andres said.

The academy report said more than 130 million people in the United States could be affected. Andres said the death toll could run into the millions in the worst-case scenario.

Other countries besides the United States would feel the impact of a solar superstorm if it hit their electric power systems, but the US power grid is so large and interconnected that any major strike could have catastrophic results.

The only way to deal with this kind of threat, Andres said by telephone, is to involve the White House, Congress, private industry, the Pentagon and agencies ranging from the Department of Homeland Security to NASA and the National Oceanic and Atmospheric Administration. This group has been meeting at NDU since last year to tackle this problem.

Many of these agencies already have considered this type of outage, but not because of an attack from the sun. The US national security community has worried about an enemy high altitude nuclear burst that could do roughly the same thing: generate an electromagnetic pulse that fried the power grid.

About three or four times in the 11-year solar cycle, the sun hurls a chunk of its atmosphere into space big enough to have an impact on humans, said Bill Murtagh, an expert on space weather at the National Oceanic and Atmospheric Administration.

Of greater concern are severe solar storms that bombard Earth with magnetized particles that could damage giant transformers so thoroughly that they would be impossible to restart. Two such monster storms occurred in 1859 and 1921. Neither were catastrophic, mostly because society was not as dependent on electricity and the US electric grid was not the sophisticated, interconnected network it is now.

The US Geological Survey suggested a 6 percent to 7 percent chance of an 1859-type solar storm in the next 10 years, Murtagh said. The coming solar maximum does not increase this probability, though solar storms could be more frequent.

It could be another 500 years before a solar storm as strong as the one that hit in 1859 heads for Earth, Murtagh said, but he added: "The more harsh reality is, it could happen next week. We just do not know." The sun launched a significant storm last month, he said, but it was not aimed at Earth.

The North American Electric Reliability Corporation, or NERC, which oversees North America's power grid, disputed the academy's estimate of a possible loss of hundreds of high-voltage transformers in a solar superstorm.

More likely, NERC said in a report this year, would be voltage collapse, which would take out power but would not destroy transformers. Any power outage would be less protracted in that event.

NERC's Mark Lauby pointed to a solar storm in 1989 that caused a power outage across most of the Canadian Province of Quebec. The outage lasted hours but no transformers were damaged.

Replacing damaged transformers is a major logistical undertaking, with a typical high-voltage transformer about as big as a small house and weighing 500,000 pounds (227 metric tons).

Other possible solutions include installing resisters on high-voltage transformers to keep the transformers from heating up. A systemic fix involves an early warning to power companies that a solar event is coming, so managers could switch to locally generated power, avoiding the use of long-distance transmission lines.

Putting resisters on all high-voltage transformers could cost $150 million to $200 million.

Paul Werbos, an expert in the field of decision theory, said that given the chance of a trillion-dollar solar storm, installing resisters and taking other measures to mitigate the risk is a "no-brainer ... We should just go ahead and do it."

Representative Roscoe Bartlett, a Maryland Republican, agreed. On Friday, he submitted a resolution to the House of Representatives encouraging US communities to develop civil defence programmes to prepare for sustained power outages, including providing 20 percent of all power needs locally in the event that the national electric grid goes down.