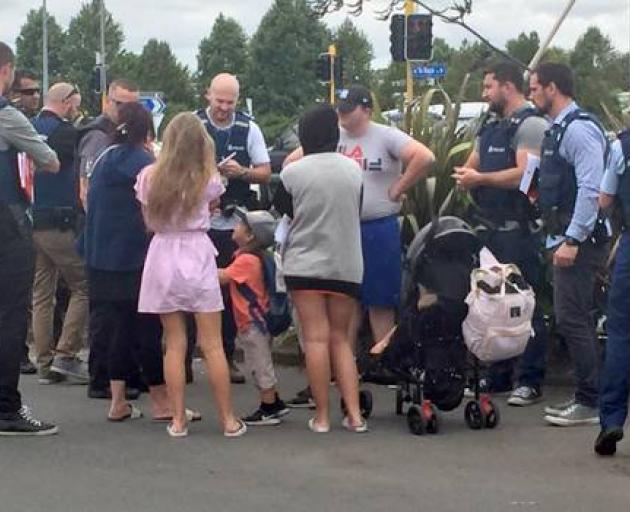 The infamous travellers talk to Police and Immigration officers in Hamilton. Photo: NZ Herald
The "unruly tourists" who had a scandal-plagued visit to New Zealand have hit the headlines again in their homeland after finding their plans for a traveller site thwarted by some determined local opposition.

Patrick Doran has applied for permission to build the site in the Worchestershire hamlet of Dough Bank, outraging locals who claim the Doran clan have "little or no respect for the residents".

Now locals are citing the European Convention of Human Rights in an effort to block construction of the site, which they say clashes with their "well-maintained houses" and "carefully attended gardens".

Doran was granted permission in 2016 to put two caravans and a toilet block on the site, but the approval lapsed after he was unable to meet conditions relating to protecting trees and a badger habitat.

Locals claim that Doran and his family have terrorised locals by playing loud music, tearing up trees, turning off their water supply and dumping waste.

Earlier this year, a resident told the Daily Mail: "Family members would take it in turns to urinate, or worse, in people's driveways. They turned their site, which was once beautiful, unspoilt woodland, into an eyesore. They built 10ft high breeze-block walls, which the council made them take down, and dumped hundreds of tons of rubble in heaps everywhere."

Residents took their concerns to the planning committee at Wychavon District Council and argued that their human rights would be breached if the site remained.

The chairman of Worcestershire County Council Peter Tomlinson, also a Dough Bank resident, told the meeting: "This applicant… appears to have no respect for planning law, for inspectors' decisions or even for the High Court and, as you are well aware, little or no respect for the residents of Dough Bank.

"I believe this applicant is actually in breach of Article Eight of the Human Rights Convention by deliberately not respecting the rights of the settled community."

Another resident told the meeting: "They have brought as many as four caravans on to the site and subdivided the plot with an illegally-built 10ft-high wall.

"Dough Bank is a small collection of well-maintained houses each with carefully attended gardens. For these reasons and others we ask that this planning application is rejected."

Doran attended the meeting with his partner, refusing to comment but saying: "I am very angry right now."

The Dorans became infamous last summer after video emerged of them littering on Takapuna Beach before a young boy threatened to knock a woman's "brains out" when the family were challenged by concerned locals.

Allegations then followed the group around New Zealand as they were accused of also attempting to rip off several restaurants and motels.

At the height of their notoriety, Auckland Mayor Phil Goff labelled them "a bunch of a***holes" before the unwelcome tourists headed back home.