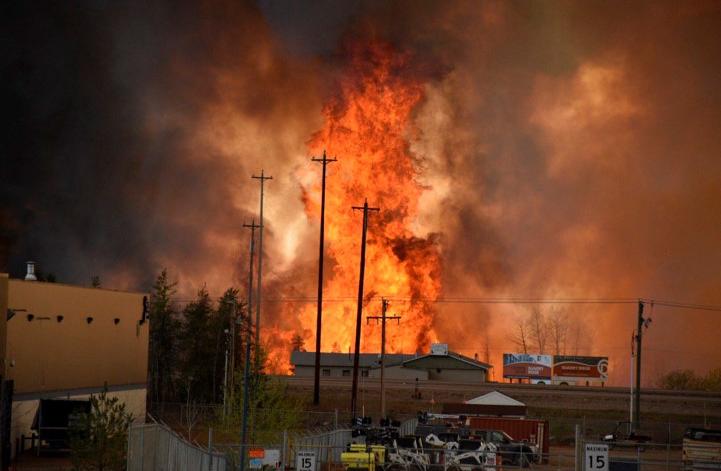 The wildfire burns in an industrial area in the southern part of Fort McMurray, Alberta. Photo Reuters

The Canadian province of Alberta raced to evacuate the entire population of Fort McMurray where an uncontrolled wildfire was taking hold in the heart of the country's oil sands region, with dry winds forecast that could fuel the blaze.

Alberta appealed for military help to battle the fire and airlift people from the smoke-filled city after authorities issued a mandatory evacuation order for 80,000, but officials said army and air force assistance would take two days to arrive.

About 44,000 people were estimated to be on the roads, fleeing the city, while approximately 8000 had reached an evacuation centre outside Fort McMurray, officials said.

"Right now, we have fire burning within the city," Chief Darby Allen of Fort McMurray's fire department told reporters. "It is impacting communities as we speak. Homes are on fire as we speak."

The 2650ha fire, which was discovered on Sunday, shifted aggressively with the wind on Tuesday (local time) to breach city limits. The blaze closed off the main southern exit from the city, Highway 93, prompting many residents to head north towards the oil sands camps.

The southern route eventually reopened but traffic was quickly gridlocked in both directions. Gas stations throughout the area were out of fuel and police were patrolling the highway with gas cans.

"This is the biggest evacuation we have seen in the history of the province," Alberta Premier Rachel Notley said at a news conference, adding that there were no known casualties.

Alberta is much drier than normal for this time of year, strengthening prospects for a long and expensive wildfire season, in the wake of a mild winter with lower-than-average snowfall and a warm spring.

Authorities expect increased winds on Wednesday that will make it harder to fight the fire.

A pic of what trying to leave Fort McMurray looks like right now pic.twitter.com/ESE7bzPkx1

Suncor Energy, whose oil sands operations are closest to the city, said its main plant, 25km north of Fort McMurray, was safe, but it was reducing crude production in the region to allow employees and families to get to safety.

Suncor said evacuees were welcome at its Firebag oil sands facility, while Canadian Natural Resources Ltd said it was working to ensure any affected CNRL workers and their families could use its camps.

Shell Canada also said it would open its oil sands camp to evacuees and was looking to use its airstrip to fly out non-essential staff and accommodate displaced residents.

A number of flights from Fort McMurray airport were cancelled and the airport advised passengers to check with their airlines for updates.

The blaze started southwest of Fort McMurray and spread rapidly to the outskirts of the city, about 430km northeast of Alberta's capital, Edmonton. Radio stations were forced off the air as staff left the downtown core.

"There's lots of smoke, it's quite bad and hanging over the city," one resident, Nick Sanders, told Reuters as he packed up to leave downtown. "Where there are trees in the distance you can see the fire."

Television footage and photographs on Twitter showed flames and smoke billowing over the city and a destroyed trailer park. Officials said a gas station had exploded and flames engulfed the roof of a Super 8 Hotel during a live report on Canadian television.

At least one residential neighbourhood in the city's southeast had been destroyed by the fire and others were severely damaged or still under threat, local fire chief Allen said.

"I'm afraid that huge parts of my home town, Fort McMurray, may burn tonight and will continue to burn tomorrow," Brian Jean, leader of Alberta's official opposition party, told CBC Radio, adding that his own home was in the immediate path of the fire.

"My thoughts are with people affected by the fire in Fort McMurray tonight," Prime Minister Justin Trudeau tweeted. "Stay safe and remember to follow evacuation orders."

Nine air tankers, more than a dozen helicopters and about 150 firefighters were battling the fire, officials said.

Most oil sands facilities are to the north and east of the city. Representatives of Syncrude, CNOOC subsidiary Nexen Energy and pipeline company Enbridge all said their operations were unaffected.

The fire is the second major one in the oil sands region in less than a year. Last May, wildfires led to the evacuation of hundreds of workers from the region, and a 9 percent cut in Alberta's oil sands output.

Last year's evacuations led to shutdowns by Cenovus Energy and Canadian Natural Resources Ltd at some of their projects.