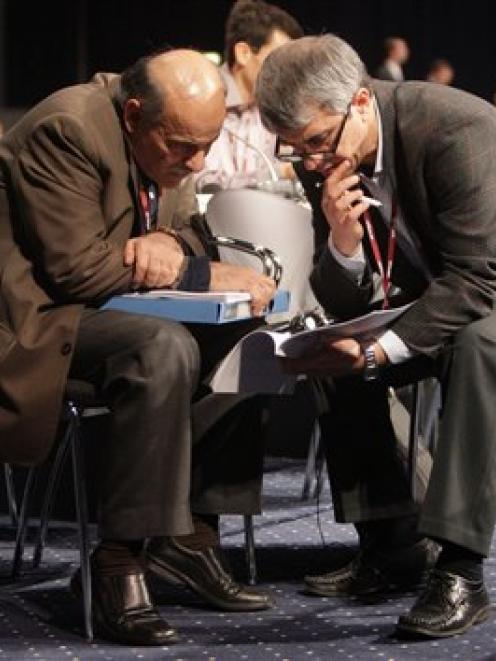 Delegates talk to each other prior to a plenary session at the UN Climate summit in Copenhagen. (AP Photo/Anja Niedringhaus)
Wealthy nations would commit to drastically reduce greenhouse gas emissions in the next decade, and the world should strive to nearly eliminate them - or at least cut them in half - by 2050 under a draft agreement circulated today at the UN climate talks.

The draft pulled together the main elements of a global pact that 192 nations have been negotiating for two years, but left numbers on financing and cutting greenhouse gas emissions - perhaps the most contentious bargaining issues - for world leaders to hammer out next week.

It was meant to focus attention on the broad goals the world must achieve to avoid irreversible change in climate that scientists say could bring many species to extinction and cause upheavals in the human environment in many parts of the Earth.

"It's time to begin to focus on the big picture," said Yvo de Boer, the top UN climate official. "The serious discussion on finance and targets has begun."

In unusually blunt language, meanwhile, China's vice foreign minister said the chief US negotiator at the talks either "lacks common sense" or was "extremely irresponsible" for saying that no US climate funding should be going to China. The world's two biggest greenhouse gas polluters have been exchanging barbs this week about the sincerity of their pledges to fight climate change.

So far, pledges to cut greenhouse gas emissions from the industrial countries have amounted to far less than the minimum. European Union leaders on Friday reiterated their pledge to increase their emissions cuts by 2020 to 30 percent from 20 percent, but only if other wealthy nations, including the US and Canada, make comparable commitments.

The six-page draft document distilled a much-disputed 180-page negotiating text, laying out the obligations of industrial and developing countries in curbing the growth of greenhouse gases responsible for global warming.

News of the document came as the European Union leaders agreed in Brussels to commit $US3.6 billion (€2.4 billion) a year until 2012 to a short-term fund to help poor countries cope with climate change. Most of the money came from Britain, France and Germany. Many cash-strapped former East bloc countries balked at donating but eventually all gave at least a token amount to preserve the 27-nation bloc's unity.

The EU commitment to reduce carbon emissions by 30 percent below 1990 levels over the next decade was conditional, depending on better commitments by the United States and Canada.

The draft agreement is less specific than other proposals and attempts to bridge the divide between rich and poor countries. It leaves much to be decided by the 110 heads of state, including President Barack Obama, Chinese Prime Minister Wen Jiabao and Russian President Dmitry Medvedev and most of Europe's top leadership, who are due to arrive in the Danish capital in one week for a landmark summit.

"This text will be the focus of the negotiations from now on," said Jake Schmidt, an analyst for the Natural Resources Defense Council.

The draft, drawn up by Michael Zammit Cutajar of Malta, said global emissions of greenhouse gases should peak "as soon as possible." But controlling carbon emissions should be subordinate to the effort to wipe out poverty and develop the economies of the world's poorest nations, it said.

It called for new funding in the next three years by wealthy countries to help poor countries adapt to a changing climate, but mentioned no figures. And it made no specific proposals on long-term help for developing countries.

In his blunt remarks, China's Vice Foreign Minister He Yafei said he was "shocked" by US climate envoy Todd Stern's comments that Beijing shouldn't expect any American climate aid money.

"I don't want to say the gentleman is ignorant," He told reporters. "I think he lacks common sense where he made such a comment vis a vis funds for China. Either lack of common sense or extremely irresponsible."

In China's view, the US and other rich countries have a heavy historical responsibility to cut emissions and any climate deal should take into account a country's development level.

China is grouped with the developing nations at the talks. But Stern said the US doesn't consider China one of the neediest countries when it comes to giving those nations financial aid.

"I don't envision public funds - certainly not from the United States going to China," he said on Wednesday. "China to its great credit has a dynamic economy, and sits on some $2 trillion in reserves. So we don't think China would be the first candidate for public funding."

The Chinese official said China wasn't asking for money, but suggested the US and China had different responsibilities in dealing with global warming.

In downtown Copenhagen, police detained 75 people in the first street protests linked to the conference. About 200 people rallied in the area where corporate CEOs were meeting to discuss the role of business in global warming.

The protesters broke into small groups, banging drums and shouting, "Mind your business. This is our climate!" There were no reports of violence.

Police spokesman Henrik Moeller Nielsen said 20 of those detained were released and at least six still in custody face arraignment on preliminary charges of vandalism. A much bigger demonstration is expected Saturday.

In Brussels, French President Nicolas Sarkozy said the EU commitment of $3.6 billion a year until 2012 "puts Europe in a leadership role in Copenhagen."

The figure was reached after two days of tough talks during which eastern EU countries - still lagging in their own development and further battered by the global economic downturn, resisted pressure to chip in. In the end, all 27 EU nations agreed to donate, but about 20 percent is coming from Britain, France and Germany.

"There are few moments in history when nations are summoned to common decisions that will reshape the lives of men and women potentially for generations to come," said British Prime Minister Gordon Brown. "This world deal in Copenhagen must be ambitious, global, comprehensive legally binding within six months."

De Boer said the fact that Europe put a figure on the table - about one-third of what UN officials say is needed - was "a huge encouragement to the process."

"Climate change will not end in three years ... so neither should the flow of cash," said Joris den Blanken, the environmental group's climate expert.

ActionAid, which focuses on development aid, said the EU was failing to pledge "real money" and that many EU states had "a track record of repackaging or re-announcing existing aid."