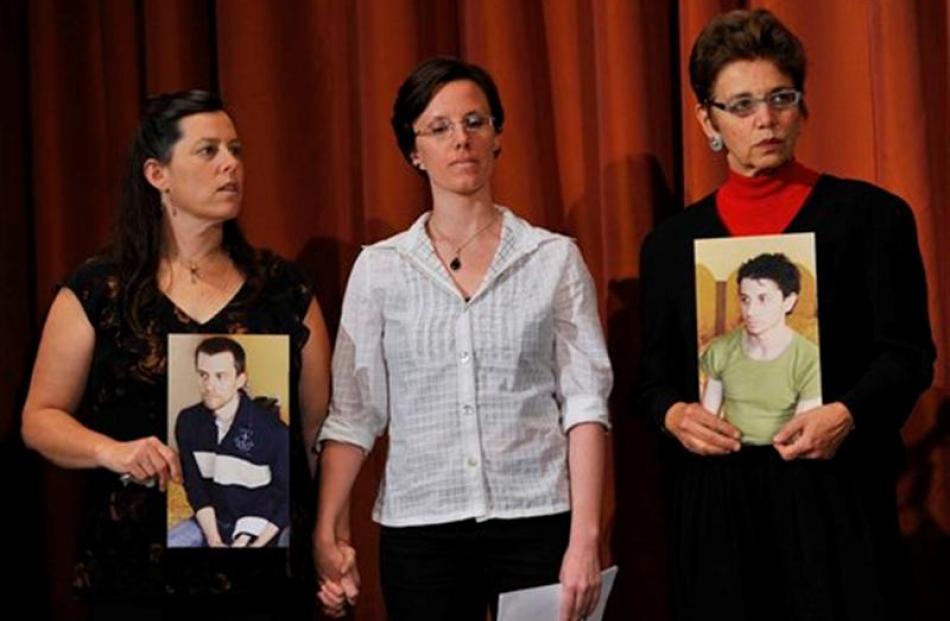 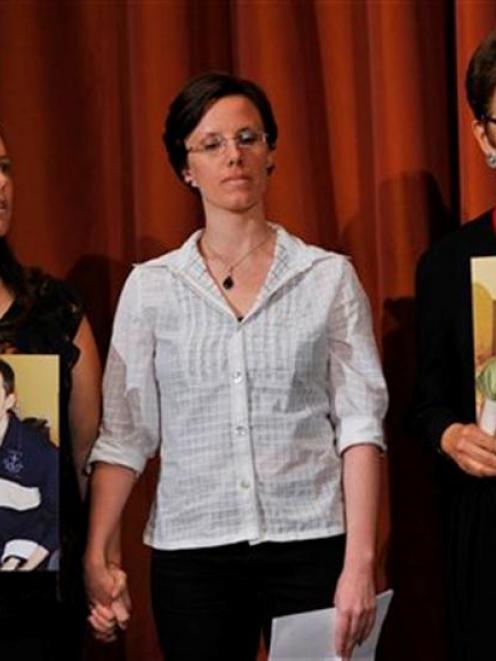 Sarah Shourd (centre), stands with Cindy Hickey (left), mother of Shane Bauer, and Laura Fattal, mother of Josh Fattal during a news conference in New York yesterday.(AP Photo/Stephen Chernin)
An American woman who was held in Iran for more than 13 months and accused of espionage said yesterday she and two men detained with her never spied or committed any crime, calling their arrest "a huge misunderstanding".

Discussing her experience at the most length since her release last week, Sarah Shourd underscored her gratitude at being released but said she felt only "one-third free" because her fiance, Shane Bauer, and their friend Josh Fattal remain in Teheran's notorious Evin Prison.

"This is not the time to celebrate," Shourd, 32, said at a New York news conference. "The only thing that enabled me to cross the gulf from prison to freedom alone was the knowledge that Shane and Josh wanted with all their hearts for my suffering to end."

He called Shourd's release "a huge humanitarian gesture". He called on the US to release eight Iranians being detained after arrests he said were illegal.

Shourd thanked Iranians and Ahmadinejad in a carefully scripted return that spoke to the continuing delicacy of her situation. She didn't take questions or discuss the conditions in which she'd been held, walking away from the podium at a Manhattan hotel hand-in-hand with her mother, Nora, before Fattal's and Bauer's mothers answered reporters' queries.

Iran has issued espionage-related indictments against her, Bauer and Fattal; the indictments could bring trials for the two men and proceedings in absentia for Shourd.

But Shourd stressed their innocence in a case that has added to the roster of tensions between the US and Iran.

The three were detained in July 2009 after Iranian officials said they intentionally crossed the country's border from Iraq. Echoing accounts their families have given in their absence, Shourd said yesterday the three had been hiking in a popular tourist area - near a waterfall in Iraq's Kurdistan region - and had no idea the border was nearby.

"If we were indeed near the Iraq-Iran border, that border was entirely unmarked and indistinguishable," she said.

"Shane and Josh do not deserve to be in prison one day longer than I was," she said. "We committed no crime and we are not spies. We in no way intended any harm to the Iranian Government or its people and believe a huge misunderstanding led to our detention and prolonged imprisonment."

Shourd's mother has said she had health problems including a breast lump and precancerous cervical cells. Shourd said yesterday doctors in Oman, where she went immediately after her release, had determined she was physically well.

Officials in Oman - an ally of both Iran and the United States - mediated a $500,000 bail for Shourd that satisfied Iranian authorities and apparently did not violate US economic sanctions against Iran. The source of the bail payment has not been disclosed.

After 410 days in Iranian custody, "I walked out of prison with my spirit bruised but unbroken," she said.

Shourd left Oman on Saturday for Dubai, United Arab Emirates, and took a commercial flight from there to Dulles International Airport, near Washington, the Americans' families said.

Shourd and Bauer had been living together in Damascus, Syria, where Bauer was working as a freelance journalist and Shourd as an English teacher. Fattal, an environmental activist and a fellow graduate of the University of California at Berkeley, came to visit them last July, and the three went hiking.

She added that she hoped their experience would provide "an opportunity for Americans and Iranians to realize that an improved relationship would be in the best interest of all people".

Fattal's mother, Laura, said she was encouraged by Shourd's release. But both she and Bauer's mother, Cindy Hickey, said it also had been hard for them.

"It was a very bittersweet moment for me - sweet because I love Sarah very much ... and very bitter. I mean, the cold hard truth is: Shane and Josh are still in prison, and we want them home," she said at the news conference.

The two said they had asked to meet Ahmedinejad during his trip in New York, as they have unsuccessfully in the past.

Ahmadinejad gave no specifics in his interview with Amanpour about whether Bauer and Fattal might also be released, saying "the cases have to be examined".

Ahmadinejad's suggestions that the three could be traded for Iranians held in the US have raised concerns that the Americans could be used as bargaining chips as the two countries face off over issues like Iran's disputed nuclear programme. The US accuses Iran of hiding plans to build a nuclear bomb; Iran denies that and says it's working only toward building nuclear power plants.

But Laura Fattal said the men's mothers weren't focused on such fears.

"We are mothers, we are not politicians, and we are just very, very eager, clearly, to have our children returned to us," she said.