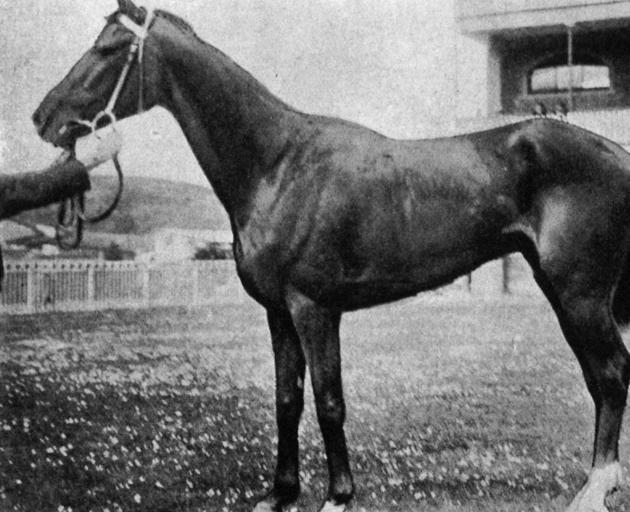 Staff Officer, winner of the hunter’s hurdles at the Otago Hunt Club’s race meeting at Wingatui. — Otago Witness, 9.11.1920.
Our Wellington correspondent wires that Dr Thacker, in the House of Representatives yesterday, suggested that the Government should take drastic methods in regard to the indiscriminate shooting that was going on all over New Zealand.

Notwithstanding the restrictions some 20 or 25 per cent of the people were going about with revolvers in their hip pockets. Mr Massey said members would recollect that the House had recently passed an Arms Bill, but it would not come fully into operation for some months. It was intended to deal with the difficulty. Mr Young: Stop the sale of revolvers. Mr Massey: That is not yet possible. We must allow dealers to get rid of their stock. We cannot stop the dealers’ business altogether. The automatic pistol, which, I am told, is the most dangerous, is prohibited altogether. The police information to us was that a considerable number of people had got into the habit of carrying firearms. The Act will stop it when it comes into full operation, and the government will do all it can.

The caretaker of the Wingatui racecourse has been in the habit of collecting empty beer bottles left by patrons of the races held there at the conclusion of each meeting and it is understood that subsequent to the last Dunedin Jockey Club meeting he collected some 400 “dead marines”, as against 2000 at a previous meeting. It might be explained that at the last meeting a licenced booth was in operation, whereas on the previous occasion there was no such institution. At the Hunt Club races on Saturday last a booth under Mr Dawson was again in operation, and a visit of inspection was paid to the booth by several members of the Licensing Committee and the sub-inspector of police. It is understood that satisfaction was expressed at the manner in which the booth was conducted, and there is reason to believe that the licensing of booths on racecourses in the Dunedin South Licensing District will be extended, so satisfactory has been the experiment in the direction of curtailing drunkenness.

London: A special correspondent who visited Gallipoli says that there is still much to remind one of the terrible days of the past. The trenches at Lone Pine are intact and even the tunnels have not collapsed. Elsewhere the trenches have not greatly deteriorated. although they are overgrown with weeds. Sunken ships still lie around the coast, breaking up in the calm, beautiful waters. Recently, Indian troops were sent to disinter and bury the remains of their compatriots at sea. The correspondent pays tribute do the Australian Corps, who are responsible for the work over the whole of Gallipoli and who are now constructing permanent cemeteries. Probably it will take three years. There is no reason why arrangements should not soon be made for civilian pilgrimages.

A farmer, the father of 12 children, all of whom had been rocked in the same cradle, was rocking the newest arrival one night, when his wife remarked: “John, that cradle is nearly worn out. It’s so rickety that I’m afraid it will fall to pieces.” “It’s about used up,” replied the husband. Then, handing her £2, he added: “The next time you go to town, get a new one, a good one — one that will last.” — ODT, 3.11.1920.