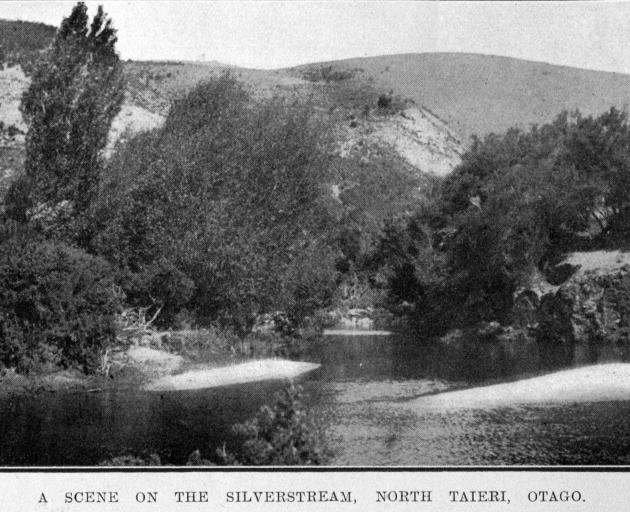 Branches from willow trees like these clogged the Silver Stream, North Taieri. — Otago Witness, 20.12.1921
The monthly meeting of the Taieri County Council, held on Friday, was presided over by Mr Walter Blackie.

The ranger reported having impounded 21 head of cattle. He had been over the Silverstream, and found that persons were still cutting willows on the banks and allowing the smaller branches to fall into the bed of the stream.

These had now collected against the piles of the Gordon road bridge. The clerk was instructed to write to the offenders. The Taieri River Trust advised “That the engineer’s recommendations regarding the upkeep of culverts and crossings at water openings be adopted for the guidance of the trust; that the County Council be authorised to carry out all necessary repairs, and charge to the trust all repairs to works for which the trust was responsible.” — Agreed to.

The suspicion in some minds that the present outcry about unemployment in Dunedin is inclined to be exaggerated is certainly wanted by the experience of the Rev V.G.B. King. At the meeting of representatives of public and semi-public bodies in the Town Hall on Friday afternoon an Unemployment Relief Executive was set up. Mr King was appointed a member of that executive, and on Friday evening he went through a roll containing the names of about 150 men. Mr King selected what he considered were 20 of the most necessitous cases — those with the largest families,etc, — and wrote to them asking them to meet him on the Saturday, preparatory to making a start on Drivers Road (Maori Hill) work today. Up to Saturday night only seven of the men had waited on Mr King, and these will make a start this morning. One Dunedin employerof practically unskilled labour informed a Daily Times reporter on Saturday night that he could find work for four or five thoroughly reliable hands. He considered that there was not sufficient differentiation between the terms “unemployed” and “unemployable”. Moreover, he put it forward as his emphatic opinion that the publicity given to the unemployed question by the Mayor (Mr J.S. Douglas) was not warranted by the actual number of men out of work. He did not deny, however, that there were a number of men seeking work.

The auxiliary ketch Waterlily arrived at Rattray Street Wharf at 10am yesterday, after a smart passage up the coast for a craft of her size. She left Golden Bay, Stewart Island, about 8am on Saturday, thus doing the trip to Dunedin in about 27 hours. A fairlysmooth sea and fine weather with the wind offshore was experienced until nearing Cape Saunders, when the wind, which was accompanied by rain, chopped round to the SSW. Since leaving Dunedin last the Waterlily has made three special trips between Stewart Island and Bluff with timber and fish from the freezer at Half Moon Bay. After discharging timber she will load general cargo for Bluff.

The Shield match between Wellington and Otago was played in Wellington yesterday, and the coveted trophy presented by the Earl of Ranfurly, a former Governor of New Zealand, will remain in the capital city. It was a close game and Wellington was perhaps lucky in winning by 13 points to 8.