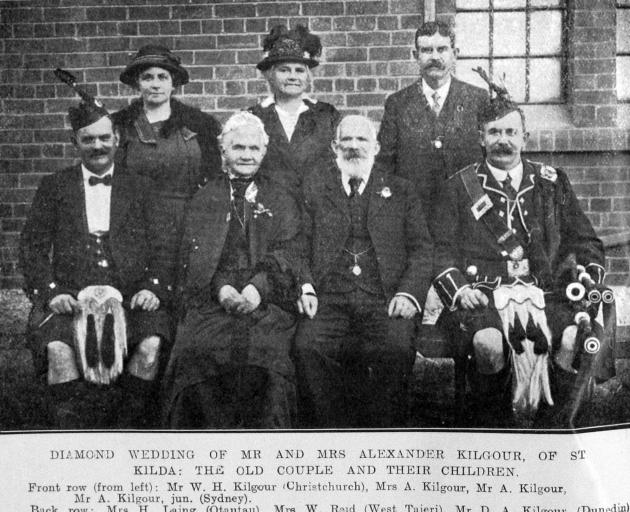 Diamond wedding of Mrs and Mr Alexander Kilgour (front centre) with children (from left) Mr W.H. Kilgour, of Christchurch, Mrs H. Laing, of Otautau, Mrs W. Reid, of West Taieri, Mr D.A. Kilgour, of Dunedin and Mr A Kilgour jun. — Otago Witness, 13.6.1922
The members of the South Dunedin Presbyterian Church entertained Mr and Mrs A. Kilgour, old members of the congregation, at a social gathering last night in the Reid Hall on the occasion of their diamond wedding.

The proceedings were commenced with the Doxology and an appropriate prayer by the Rev Mr Fairmaid, after which the gathering entered into the social spirit of the evening and spent a couple of hours very enjoyably.

The Rev Mr Fairmaid, who presided, voiced the sentiments of the company when he said it was the wish of all Mr and Mrs Kilgour’s friends that they would yet enjoy many years of health and happiness.

Mr Fairmaid read a minute, adopted by the office-bearers of the church, offering Mr and Mrs Kilgour cordial congratulations and expressing the wish that they might be spared to enjoy a prolonged eventide of life. The evening was closed with the National Anthem and "Auld Lang Syne."

What is known as a Community Sing has attained a wide measure of popularity in Wellington, as is proved by the fact that the large Town Hall has not been commodious enough to accommodate all the persons desirous of participating in this form of making a joyful noise.

The idea of community singing is spreading, moreover, from Wellington to other centres in the North Island. It has not so far penetrated deeply in the South Island. It seems worth a trial.

The theory — it is quite American — is that the act of singing contributes to cheerfulness of spirit and that a great many people who would shrink from getting up on a platform or in a room before company will readily enough join with a large number of others in singing and will derive pleasure from doing so.
This supplies, no doubt, an illustration of what is called mass psychology. — by 'Wayfarer'

In Dunedin this week

The proposal to inaugurate "community singing" in Dunedin is now well under way.

The Mayor (Mr J.S. Douglas) received a telegram yesterday from Mr Albert Russell, who started the movement in Wellington and Christchurch, stating that he would arrive in Dunedin on Thursday, and would be prepared to take charge of the first "sing" in this city.

A provisional committee, consisting of Messrs T. Ritchie, R. Bennell, V. Drew, H.P. Desmoulins, W.R. Sinclair, W. Tyrie, and P. Braithwaite has been set up to make the preliminary arrangements for the first "community singing" in the Octagon Hall from 12:30 to 1:30pm on Friday.

Later a permanent committee will be set up to arrange for officials to take charge of the gathering from week to week.