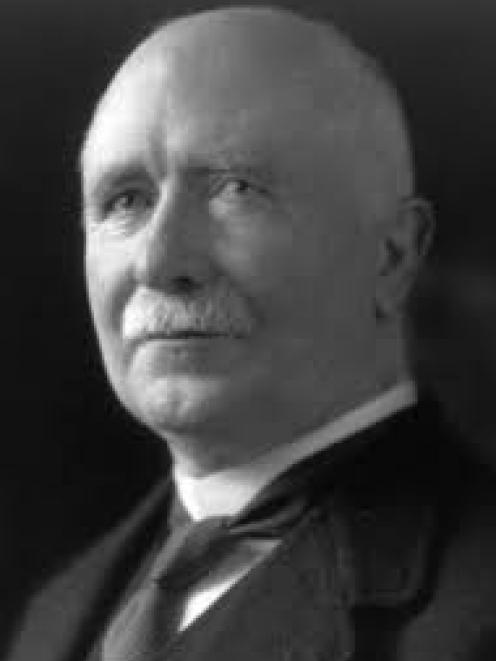 Prime Minister William Massey. Photo: Wikipedia
The Prime Minister was asked at the conference of producers at Wellington last week for any information he could give about the Nauru purchase, and especially for information as to when phosphates from the island would be available to New Zealand farmers.

Mr Massey, in reply, said that the Nauru negotiations had advanced a stage in as much as only a day or two ago he had been notified that it would be necessary for the government to find New Zealand’s share of the purchase money on or about July 1. He reminded the conference that besides Nauru, the three countries concerned —  Britain Australia and New Zealand — were taking over Ocean Island with the whole of the business and interests of the British Phosphate Company in these two Islands. According to the schedule, the company had six ships under charter and he was not able to say definitely whether the charters of these ships would be taken over with the other business. In any case, judging by present appearances, the business would come under the control of the three governments about the date he had mentioned.

A supplement to the New Zealand Gazette for last week contains the text of the civil code for the New Zealand administration of Samoa which has been in operation as from the 1st of last month. The orders and regulations cover almost 100 pages of the Gazette and “The Samoa Court Order 1920’’, which is really the Constitution Act, contains 382 sections. Part one of this order provides for the executive government of Samoa, and succeeding parts for the constitution of the legislative government of Samoa (with an Administrator and Legislative Council) , the creation of the High Court of Western Samoa, the extension of the civil jurisdiction of the Supreme Court of New Zealand to Samoa, and the extension of the criminal jurisdiction of the court in respect of Samoa,the various offences coming within the law, the control of the land and other matters and the codification of English, Samoan and New Zealand law as applicable to Samoa. The other orders which have been gazetted govern the customs tariff for Samoa, the post & telegraph, immigration, quarantine, land registration, native land and titles commission and maintenance and affiliation.

In accordance with notice given on Friday last the coal miners at the Taratu Company’s mine went out on strike yesterday. It appears that when the new agreement of three months ago came into operation, granting a 50% increase on pre-war rates, the increase of threepence per ton granted the miner’s in 1918 was discontinued. This, in addition to a resumption to the pre-war rate of 4s per yard “end” rate, instead of the 6s lately paid, is the miner’s grievance. A largely attended meeting of the miners affected was held yesterday afternoon. About 50 million are affected, but it is understood there is a lack of unanimity among the men on the question of the strike. Two or three have made applications to the management of the Kaitangata mine, and, having been engaged, will commence work this morning.