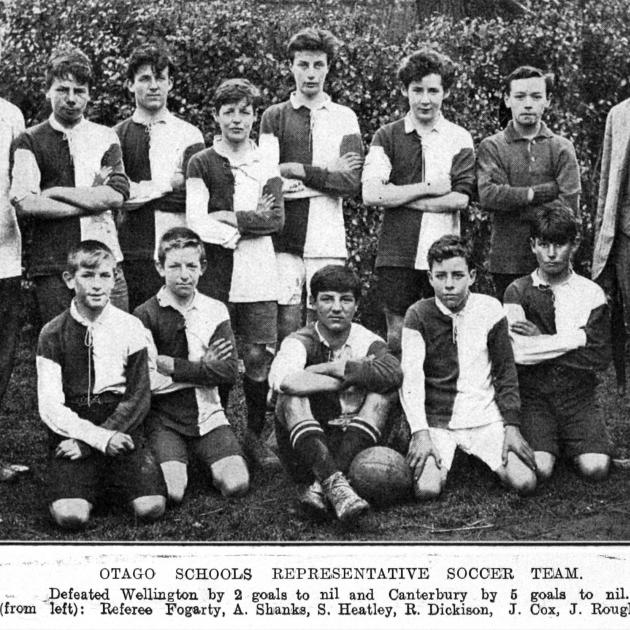 The Otago schools' representative soccer team which defeated Wellington 2-0 and Canterbury 5-0. — Otago Witness, 30.8.1921.
As a curtain-raiser to the provincial match, the second match of the schools’ tournament was played. It was a keenly-fought game, and last and exciting from start to finish. In the first half play was very even, and moved up and down the field at a great rate.

Cox as centre half and Sutherland at full back cleared for Otago time and again, while Bognuda, the smallest boy on the field, played a splendid game as full back for Wellington, robbing the hefty Otago forwards time and again. At half time there was no score. In the second half Otago had the better of the game, the Wellington forwards apparently tiring. Several times they attacked strongly, but Cox, Sutherland, and Evans (in goal) were too sound in defence. Reekie, the Otago captain, was several times dangerous at centre forward, though Bognuda and Harris saved repeatedly. Finally good work between Cox, Auld, and he resulted in Reekie finding the net with a splendid shot. Shortly afterwards a fine individual run by Reekie resulted in a second goal, and the game ended Otago 2, Wellington nil.

A meeting convened by the Medical Officer of Health (Dr McKibbin) was held in the Town Hall on Saturday morning for the purpose of setting up an epidemic advisory committee, although at the moment there is no evidence of the existence of influenza in a severe form in or about Dunedin. Dr McKibbin explained that it was extremely unlikely that we would for many years to come be visited by an epidemic such as that of 1918. Moreover, there was no present evidence of epidemic severe influenza in New Zealand, but merely a few scattered cases. But at the same time the regulations under the Health Act of 1920 imposed upon him the responsibility of convening local committees to fight epidemics should they occur, and he desired to be sure of a definite organisation which would be prepared to undertake that work. It was resolved that all present constitute the Advisory Committee, with the Mayor as president, and with power to add to the number. An executive committee consisting of the Rev. V.G.B. King and Messrs C. Speight E.C. Hazlett, E.A. Rosevear and C.B. Smith was set up to frame a definite policy, to consider the allocation of substations, and to approach the local bodies and associations capable of assisting should the need arise. The proposal is to form a voluntary organisation, trained and prepared to undertake active duty on demand.

“Taking a general view of the situation we see that it has only been within the past century or so that dental decay has grown to assume the present alarming proportions,” state Drs E.H. Wilkins and T.A. Hunter in the current New Zealand Health Journal. “Dental disease, broadly speaking, is a modern disease. Side- by-side with its increase we find a rapid development of refining, preserving, and artificialising processes as applied to foodstuffs. Furthermore, it is only in those countries and communities where these artificial and refining processes have been extensively adopted that dental disease has become widespread. Dental disease is to be found in each country in corresponding proportion to the extent of the use of refined food.  — ODT, 22.8.1921.