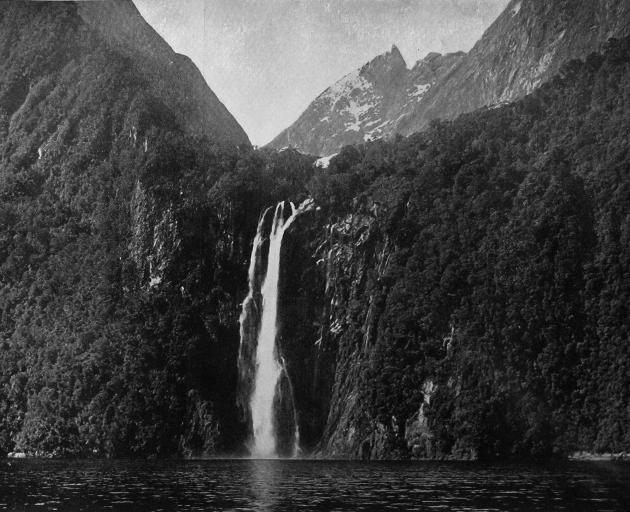 Stirling Falls (150 metres) on the Kimberley Range, Milford Sound. - Otago Witness, 28.10.1919.
This has been a ''rat week'' in Great Britain, rat-catchers having been distributed about the country to supervise the offensive.

We have heard by cable of an outbreak of a mysterious disease among cats in the Old Country which has been attended by a heavy mortality. The prevalence of this disease and the prominence which is now being enjoyed by the rat-catcher do not, however, stand precisely in the relation of cause and effect.

Legislation was introduced in the House of Commons in August ''to make further provision for the destruction of rats and mice.''

The matter has doubtless its humorous side, but the scientist, the sanitarian expert, and the enlightened farmer will appreciate its serious side as they have done in Australia where the loss of wheat, stored in vast accumulations, must have run into many thousands of pounds during the past few years through the depredations of mice. We do not know what is the population of the Old Country in terms of rats and mice.

Fifty million rats are, however, said to be marked out for destruction. During the war period the rat appears to have been left comparatively in peace, everybody being too busy to attend to him, and he has thriven and multiplied accordingly.

Now the counties are appointing executive rat officers at from 200 to 300 a year, and paying from a penny to twopence for every rat-tail, the generous Isle of Wight scale even reaching threepence.

But the rat-hunting enthusiasm of one or two counties out of many is no doubt rightly regarded as futile as against the amazing fertility and the adaptability of the rodent.

Therefore it is concerted or national action that is aimed at, and it is suggested that there is no danger of humanitarian sentiment being affronted by this crusade.

A petition bearing 770 signatures of residents of Stewart Island and tourists occasionally visiting the resort was presented to the House yesterday by Sir Joseph Ward.

The request of the petitioners was that the Government should subsidise the services. The Harbour Board, it was represented, could not improve the service without the aid of a subsidy, and had signified its willingness to get a new boat if the Government paid a subsidy to the extent of 5 per cent annually upon the cost of a new boat.

Generally it was represented that, owing to the bad service, the benefits of the island as a tourist resort were not obtainable as they ought to be.

An unusual sight was witness at Brydone on Monday, when 17 teams, of three and four horses each, were to be seen ploughing, discing, and harrowing a field of 24 acres, the residents having turned out in force practically to assist in this way a neighbour who is unfortunately seriously ill.

Mr D. Grieve was in charge of the proceedings, and the work was carried out methodically and expeditiously.

An amusing story is told by the Te Kuiti paper as the outcome of a recent sly grog-selling case. A sly grog-seller sent an order for a special brand of whiskey to an hotelkeeper, enclosing 3 10s.

He had used another man's name, as suspicion was already resting on his own, and the hotelkeeper, not having the brand which was required, unwittingly sent the money to the wrong man, who very promptly pocketed it.