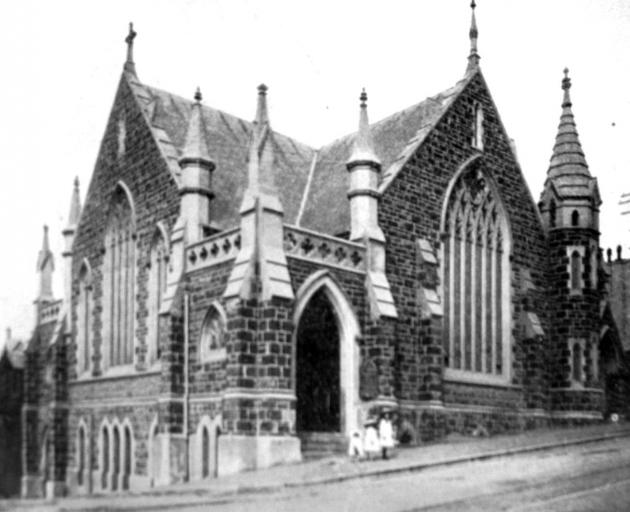 Trinity Methodist Church, Stuart St. — Otago Witness, 20.07.1920. COPIES OF PICTURE AVAILABLE FROM ODT FRONT OFFICE, LOWER STUART ST, OR WWW.OTAGOIMAGES.CO.NZ
For Dunedin Methodists July 10, 1920 is “a day in golden letters to be set” for it marks the completion of a full half-century during which greatest influences have streamed from the portals of Trinity Church to the enrichment of the entire community.

Trinity, which is regarded as the Cathedral of Otago Methodism, has been the mother of most of the Methodist churches that have sprung up in Otago and Southland during the last 50 years. It should be clearly understood that the present celebrations are not of the Jubilee of Otago, nor yet of Dunedin Methodism, but simply of the opening for public worship of the present church building, which for the past 50 years has stood in the community as a witness to the undying evangel, and has proved a source of grace and light to unnumbered light lives. To the Methodist Church belongs the honour of having first introduced Christianity to Otago, through the Reverend James Watkin, an honoured missionary alike amongst the Tongan and Maori people.

With his wife and five children, Mr Watkins left Sydney in the old ship Magnet on May 1, 1840.

They arrived off Waikouaiti on May 15, but, owing to a storm, did not land until the following day. On May 17 he preached the first sermon ever delivered in the province, from the text: “This is a faithful saying and worthy of all acceptation, that Christ Jesus came into the world to save sinners.”

At the conclusion of the match between University and Zingari-Richmond on Saturday an incident of a pleasing nature took place in the Zingari-Richmond dressing room. Mr W. J. Strong, along with the whole of the University team came in and complimented the victors on their fine, clean game and congratulated them on their win. After their captain had spoken, the University players gave a Maori haka in great style. The Zingari-Richmond president thanked them for their kind remarks and expressed the opinion that the University players not only had set a standard for football, but also, by their manner, had shown that off the field they could set an example as to how the social side could be developed. After expressing the hope that University would be the 1920 champions, Zingari-Richmond team gave three hearty cheers, which closed an incident which will be long remembered by both clubs.

According to the Daily Chronicle, Mansfield (England) was greatly interested in a romantic wedding; the bridegroom, Mr William Hebden, of Auckland, New Zealand, having crossed the world for a bride, Miss Lucy Cash, of Mansfield, whom he had never seen until his arrival in England last week (writes our London correspondent). Many years ago, Mr Hebden married a cousin of Miss Cash, and during the war his four sons came over to fight for the Motherland. They spent their leave at Mansfield and thus old ties between the two families were renewed. The sons were wounded in war, but have been able to return home, and, his wife having died, Mr Hebden opened correspondence with Miss Cash. Proposal and acceptance were by letter, and after a voyage lasting 50 days, he claimed his bride. — ODT,12.7.1920