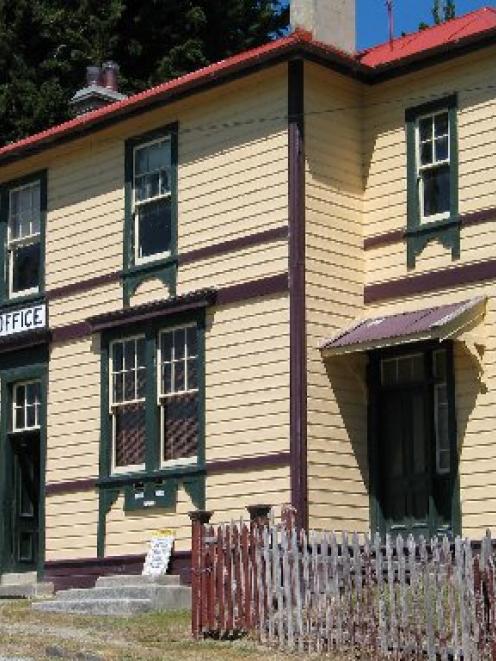 She outlines why conservation architect Jeremy Salmond condemns the work.

"Conservation should be regarded as our gift to the future, and carries with it a sense of obligation to later generations - conservation of our cultural heritage is as much about looking forward as it is about looking back," writes leading New Zealand conservation architect Jeremy Salmond in his report about the St Bathans Post Office.

With the loss of so many of our historic buildings in Christchurch, we can ill afford to add to that number intact examples of our built history, simply through well-meaning but poorly advised decisions without regard to conservation practices.

The proposed conversion of the St Bathans Post Office, under consideration by the Department of Conservation, is a case in point.

It was built in 1909 as a post and telegraph office, and included upstairs accommodation for the postmaster/mistress.

It is in remarkably sound and original condition inside and out, with most of the original post office fixtures and fittings still intact or on site.

Jeremy Salmond sees the building as having "exceptional historic significance".

Mr Salmond was engaged by the St Bathans Heritage and Environment Preservation Trust to provide an independent professional view of the proposal by Cameron Accommodation Ltd to turn the post office into travellers' accommodation, and the effects of this on the building's historic values.

Earlier, Doc commissioned a Heritage Inventory by Guy Williams and Associates, which stated "a marked feature of the building is the very high degree of authenticity".

Mr Salmond agrees with that opinion and is dismayed work had already begun before the concession process concluded.

He is equally unimpressed with the standard of work.

"There is no evidence on the site that any of the work is being approached with regard to conservation principles or practice," he said.

He visited the site in early February and sees "the building as a complete time capsule.

"It is remarkably intact, and the many layers of history have left a patina which palpably illustrates the legacy of previous use, [giving it] the particular value and appeal of historic heritage.

"These values are fragile, and once lost or damaged are almost impossible to recover".

The idea of using the building for visitor accommodation seems to Mr Salmond to be a good one, but the point of doing this - as the applicant has indicated in his application - is to give visitors the opportunity to "step back in time".

The irony of this application is the proposal seeks to strip away almost everything that will ensure the authenticity of that experience.

His impression of what is now taking place in the building is that it is "being modernised without regard to the very qualities for which it is valued, and with no clear specific regard to the value of the surviving original fabric".

According to the plans for the ground floor, the now rare two-door double-glazed telephone booth will be converted into a toilet, the exchange room into a shower, and the writing booths in the foyer into a kitchen, while the public counter will house a hand basin.

will irrevocably destroy both highly significant fabric and also the character and authentic appearance of these rooms.

The introduction of sanitary facilities will result in irreversible change to the primary public areas, which best illustrate the historic purpose and character of the building, as a post office."

A similar scenario is proposed on the upper floor.

The conversion of an original bedroom into use as a bathroom "may increase the comfort of temporary occupants, but has already resulted in significant damage to original fabric".

The removal of the bath and subsequent drilling through the lead tanking is "destructive of an original and now rare example of an historic technique for waterproofing bathrooms".

The original location of the bath was quite adequate.

Further, "I deplore the inadequacy of the documentation for this project.

"No detail is provided to show how [new] fittings will be installed, or the effects on original features, or how original finishes are to be protected. It in no way reflects conservation principle or practice".

He says all this should have been dealt with through the preparation of a conservation management plan by Doc before considering a lease for the building.

Mr Salmond recommends this building should be protected from further development and that "under no circumstances should the ground floor be used for visitor accommodation; under no circumstances should sanitary fittings be installed in ground floor public spaces; no original fittings or fixtures related to the use of the building as a post office should be removed or damaged; authentic artefacts of the post office use should be retained and preserved as part of the ground floor presentation for public information and interpretation".

Similar advice was given by the Conservation Board to Doc.

The public will be excluded for at least the 10-year run of the concession; quite possibly longer.

The building was sold to the Department of Lands and Survey in 1981 by the Duffy family in order that it would be preserved and publicly accessible.

Catherine Spencer, of Dunedin, is secretary of the St Bathans Heritage and Environment Preservation Trust. Mr Salmond's full report can be found here: