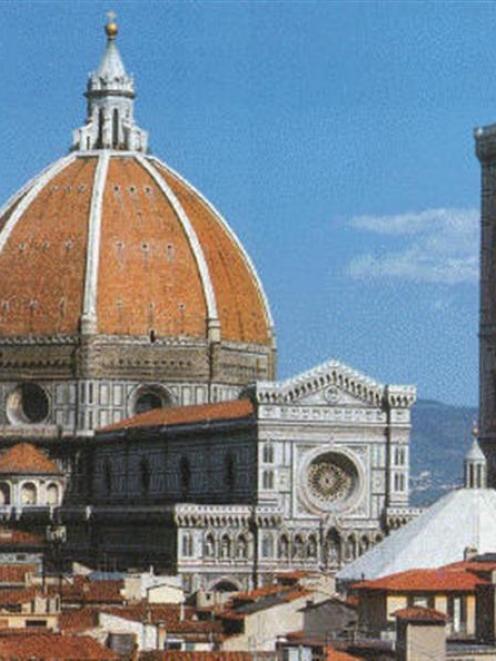 The Duomo - Santa Maria del Fiore, the cathedral of Florence, and Giotto's Campanile.
Some things put history and human endeavour in perspective.

Today we have been marvelling at the works of men; and they were, it seems, entirely men who drew the patronage of the rich and wealthy through Florentine Italy of the late Romanesque, Gothic and Renaissance periods.

Great art and architecture were not yet the preserve of women.

It reaches 91m into the pastel blue summer skies, narrowly pipping its attached "Campanile", or belltower, which is a mere 87m off the piping hot pavement.

Work on the Duomo was begun in 1296 by Sienese architect Arnolfo di Cambio.

It was completed, more or less, about 150 years later - although its neo-Gothic facade was added in the 19th century.

The unfinished original was torn down in the 16th century.

The cathedral is about 150m from end to end and about 90m wide, big enough to accommodate a small-to-medium rugby stadium.

Some natural light enters from the apex of the dome, though not to encourage grass growth.

The flooring is made of patterned tiles, which, viewed from on high, form a remarkable mosaic.

The most extraordinary architectural and engineering feat of the Duomo, indeed of the world at the time of its construction, is the dome.

It is a Renaissance masterpiece.

At the time, it was the largest of its kind, exceeded even now only by St Paul's in London, St Peter's in Rome and the cathedral in Milan.

Trudging the 463 steps to the top, one cannot even begin to imagine how men in the 15th century could possibly have constructed such an awe-inspiring monument.

When the genius Michelangelo went to Rome to work on the St Peter's equivalent he said, according to my guide book, "I go to build a greater dome, but not a fairer one."

The task of designing and supervising the building of the dome fell to artist and architect Brunelleschi.

It took 16 years, and the construction is notable for consisting of two concentric domes and for the fact that they were built without supporting frame.

According to our guide, Leonardo (although not da Vinci, he joked), modern architects and engineers have studied the construction, fed all the dimensions and details into computers and have concluded the dome should have long since collapsed.

Throughout the duration of the construction of the dome, with hundreds if not thousands of workers toiling hundreds of feet up to raise the hewn stone and bricks from which it is made - the stuff of OSH nightmares - a solitary death is recorded: a workman who, according to Leonardo, took too much wine for his lunch.

As I write Florence is in the grip of a heat wave.

Nonetheless, its streets throng with tourists from early morning, gaping at the Renaissance masterpieces encountered at every turn.

If the heat is stultifying, the "culture" is stupefying.

A mid-afternoon siesta is almost compulsory and the outer streets quieten only to spring back into life in the early evening and late into the night.

People of all ages - families strolling, young men and women flirting, students in roadside bars - are out on the streets in these sultry evenings drinking in the atmosphere, enjoying street entertainment, window shopping and parrying the advances of hawkers working overtime.

We have been staying in the student quarter - most are still away, but there is a suitably bohemian feel to the district.

The convivial nature of life on the streets and the way in which such a rich cultural heritage impinges on every street corner sets one thinking and making connections.

Alcohol is freely available to all and freely partaken of, but I have not yet seen one drunk in public.

It would be trite to attempt to draw meaningful comparisons from such a brief encounter with this admittedly privileged and rich city centre, but it is almost impossible not to think of Dunedin's Octagon late on a weekend night - and wince.