Carisbrook legends and stories live on 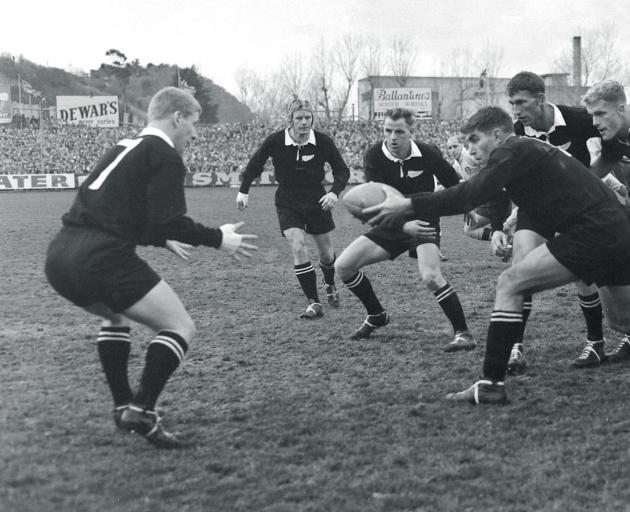 Colin Meads passes the ball to halfback Chris Laidlaw during a test between the All Blacks and Australia at Carisbrook in 1964. PHOTO: ODT FILES
It is nine years since Carisbrook hosted its last rugby test. Joss Miller  looks back fondly on the "House of Pain".

Carisbrook was the spiritual home of Otago rugby for more than 100 years. It was also the venue for cricket for much of that period. The last rugby test was played there in 2010 with the era of Carisbrook ending shortly after that when the new Forsyth Barr Stadium opened in 2011. A period of silence then descended over "The Brook'' with its demolition commencing in 2013 and in a short time this once majestic venue was reduced to piles of rubble.

A few years on it remains a largely sad and empty space with only the odd remnant from its past being retained. The mounds of rubble are increasingly obscured by the prolific growth of tall grass, weeds and ever flourishing toetoe plants. The only noticeable addition being an extremely large shed erected on the eastern edge of what still looks to be a field of utter desolation and abandonment partly symbolic perhaps of T.S. Eliot's vision in his famous poem The Wasteland.

Although Carisbrook's physical presence has been erased, its history and memories remain. Before the advent of professional rugby, Carisbrook epitomised all that was good about the amateur game. During those years All Blacks also played for their clubs and provincial team. Everyone rubbed shoulders and there was no particular sense of hierarchy. Players were accessible and well thought of in the community.

On the day of a test vast crowds from all over the province and beyond would descend on Carisbrook or what later was also affectionately known as The House of Pain. Every corner of the ground would fill to breaking point with upwards of 40,000 spectators squeezed in creating an astonishing atmosphere. Scarfies would embark on a pub crawl from North Dunedin to the venue. There were a variety of stands all with their unique character. Apart from the Main stand there were the Railway, Hillside, Rose and Neville St stands. For the more frugal there was also "The Scotsman's stand'' providing a bird's-eye view from a high point on South Rd. Not to be forgotten were the Terraces and Embankment where most of the entertaining banter emanated from and with the consumption of alcohol this became more colourful as the day progressed. Crowds were generally good natured and when the All Blacks scored a try a thunderous sound of stomping feet and applause swept around the ground.

Over the years, some players and moments stood out. Chris Laidlaw had a remarkably long and swift pass and also a spectacular reverse pass that would mesmerise opponents. Outside him, Earle Kirton displayed electric acceleration and was particularly adept at running the blind side. For myself, one game in particular in 1977 stood out. That year, Otago played the British and Irish Lions. A diminutive flanker by the name of Rex Smith shone that day. Despite being injured early on he played like a man possessed, constantly laying his body on the line and inspiring his team mates. It was a pulsating game with the crowd on the edge of their seats throughout. The Lions won 12-7 but what a game!

Current All Black Ben Smith's formative playing career was at Carisbrook with his All Black debut in 2009. Similarly, Adam Thomson, who at age 37 was a recent addition to this year's Otago provincial squad, had previously played on Carisbrook for a number of years and wore the All Black colours from 2008-12.

Let us not forget, too, some of the legends of cricket whose deeds have entered the history books.

Bert Sutcliffe was one of New Zealand's finest batsmen. He also made two triple hundreds while playing for Otago. His attachment to Carisbrook was such that an urn containing some of his ashes was buried there.

I recall in my youth watching Central Districts fast bowler Gary Bartlett in action. He is reputed to be possibly New Zealand's fastest ever. Technology unfortunately back then could only measure speeds up to 80 miles per hour.

Frank Cameron the Otago and New Zealand medium-fast bowler always impressed with his steady, consistent, accurate deliveries and he also had a remarkable capacity to bowl for lengthy periods.

Who can forget Murray Webb when he burst on to the provincial scene as a fiery fast bowler unnerving opposition batsman and gaining wickets with relative ease?

Finally, there is Iain Gallaway, a commentator of rare quality and excellence. For almost 40 years he commentated rugby and cricket matches at Carisbrook with effortless style and skill. He deserves his reputation as one of the greats not only for his talent but for his humility and dignity.

Despite the demise of Carisbrook, legends and stories from its past will continue to live on.

'Some' of Bert Sutcliffe's ashes. Good news the remainder are elsewhere, given that apparently no one could find the urn, before Carisbrook was decommissioned.

The last rugby test at Carisbrook was in 2011 NZ Vs Fiji - not 2010 as listed in the story.
New Zealand vs Fiji at Carisbrook
Dunedin, New Zealand
Friday, 22 July 2011