Change for the better in the Congo 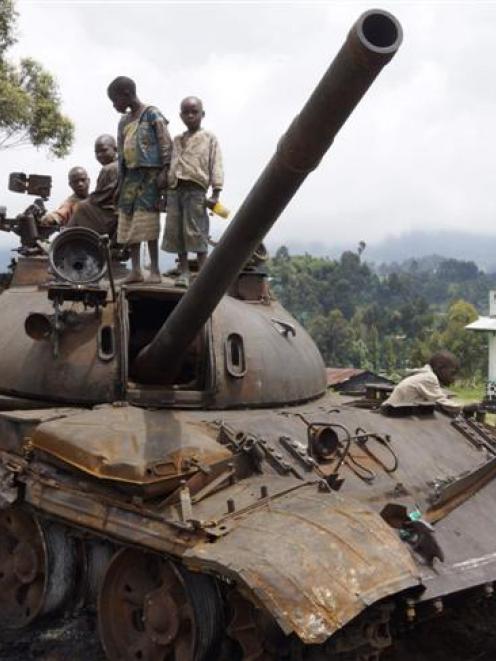 Congolese children play on a destroyed military tank, abandoned by the M23 rebel fighters near the town of Goma on Wednesday. Photo by Reuters.
Can it really be as easy as that? Get Rwanda to stop supporting the rebels in eastern Congo, pay the soldiers of the Congolese army on time, send in a United Nations force that actually has orders to shoot, and presto!

The bad guys surrender or flee, and a war that has lasted almost 20 years and killed up to five million Congolese is suddenly over.

At least that's the way it is playing in the media (to the extent that news about the Congo plays in the media at all), and there certainly has been a sudden change for the better.

Less than a year ago, the latest and one of the nastiest rebel militias, M23, actually occupied Goma, a city of one million people that is effectively the capital of eastern Congo. UN troops watched helplessly from the sidelines and the Congolese Government's army got drunk and took revenge on civilians for its defeat, while M23 officers swaggered through the city taking whatever they wanted.

It was so humiliating, so stupid and wrong, that Joseph Kabila, the president of the Democratic Republic of Congo (DRC), to give it its proper name, stripped dozens of officers in eastern Congo of their commands and called them back to Kinshasa. Their replacements had at least a rudimentary grasp of their trade - and they have not yet been in the east long enough to develop lucrative deals with the local mining interests and the militias that feed on them.

The Congolese army's soldiers in the east got some much-needed training in small-unit combat drills. They also started to get paid regularly (in contrast to the more usual pattern where the officers steal their pay and the troops compensate themselves by looting civilians). It's actually not that hard to turn a rabble into a disciplined army if you have a bit of time and money, and the job was done within a year.

Meanwhile, the ''international community'' (aka the United States and its friends) put heavy pressure on Rwanda's President Paul Kagame to stop supporting M23. Recently, the US even blocked military aid to the small but heavily armed republic just across Lake Kivu from Goma that has been meddling in the DRC's affairs, sometimes even invading the east, for the past two decades. It worked: Kagame stopped answering the phone when M23 called.

And the United Nations, whose 13,000 peace-keeping troops in the eastern Congo had been of no use against M23 because they had no mandate to fight, was so embarrassed that it changed the rules. A new ''intervention brigade'' made up of 3000 South African, Tanzanian and Malawian troops was sent, with tanks, helicopters, drones, and full permission to use its weapons against the rebels.

The offensive against M23 started two weeks ago, with the DRC troops doing the fighting and the UN ''intervention brigade'' in support. Apart from firing a few mortar rounds on the last day, the UN troops were not even committed to combat. On November 5, the M23 forces lost their last hilltops and surrendered or fled across the border into Uganda or Rwanda, and the war was over. Maybe.

It is a huge step forward, but the peace will only last if two things happen. One is that the DRC now turns its attention to the biggest remaining militia in the east, the Democratic Forces for the Liberation of Rwanda.

The FDLR is a Hutu militia, run by the remnants of the Hutu regime that carried out the genocide against Tutsis and Hutu moderates in Rwanda in 1994. Like most of the eastern Congolese militias, the FDLR makes its living by looting the local population and running protection rackets against the rich mining operations in the area, but its ultimate aim is to regain power in Rwanda.

It was the presence of this force just across the border in eastern Congo that caused Rwanda to intervene in its giant neighbour in the first place. M23 was just the last of a series of Tutsi militias that Rwanda created to contain the FDLR, and if it is not destroyed, the Rwandan meddling will resume.

The other condition for a lasting peace is that the DRC's own troops in the east of the country do not fall back into their bad old ways. There is big money to be made if they collaborate with various militias in shaking down the mining operations, and it remains to be seen if the soldiers (and members of Kabila's own government) can resist the temptation to profit from deals of this sort.

So it isn't really over yet, but it's a good start. After a generation of carnage, the people of the eastern Congo deserve a better future.