Francis Sullivan, chief executive officer of the Truth, Justice and Healing Council, delivers a message to the Royal Commission into Institutional Responses to Child Sexual Abuse sitting in Sydney during the public hearing into Catholic Church authorities on February 6. Photo: Reuters.
David Tombs compares the Catholic Church’s recent responses to allegations of sexual abuse in Australia and in Peru.

Two documents released last week on sexual abuses in the Catholic Church in Australia and in Peru seem to show very different responses to the problem of historical sexual abuses. The Australian Royal Commission into Institutional Responses to Child Sexual Abuse was formally established in 2013, and it has been examining abuse by Catholic clergy and the responses of various Catholic authorities. Its report, titled "Proportion of priests and non-ordained religious subject to a claim of child sexual abuse 1950-2010" (February 2017), gives a clear sense of the scale. 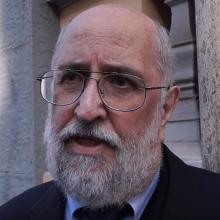 The figures suggest  about 30% of alleged perpetrators were priests, 32% were religious brothers, 29% were lay people, 5% were religious sisters, and for 4% the religious status was not known. The total proportion of priests ministering in Australia who have been alleged as perpetrators of sexual abuse since 1950 is 7%.

Some religious orders have a much higher proportion of allegations, including 40%  for the St John of God Brothers, and 22% for the Christian Brothers. Others have relatively low figures, such as the Dominicans at 2%.

The report was undertaken with the assistance of the Catholic Church authorities (archdioceses, dioceses and religious orders) and the Truth, Justice and Healing Council.

The council is a church body which co-ordinates the church’s response to the commission. The council has stated its commitment to recognising and acknowledging the crimes of the past and the devastating harm caused by child sexual abuse. In a response to the release of the report on  February 6, Francis Sullivan, a spokesman for the council, publicly described the abuses as shocking and indefensible. He said  Catholics "hang our heads in shame’’ at such a report, but it is "a history that must be told and reckoned with". A similar openness to truth and a willingness to confront the challenges is strangely absent in the other document released last week. This is a Vatican letter from the Congregation for Institutes of Consecrated Life and Societies of Apostolic Life. It is dated January 30, 2017, but only  became public on February 10. The long-awaited letter recommends sanctions against Luis Fernando Figari, the founder of Sodalitium Christianae Vitae (known as Sodalicio) in Peru, but its leniency has shocked and surprised many  familiar with the case. Mr Figari has been banned from returning to Peru, or speaking to journalists, but allowed to remain in Rome without further sanction.

Mr Figari founded Sodalicio in 1971 as a society of Apostolic Life within the Catholic Church. Although most of Sodalicio’s members are lay Catholics (including Mr Figari), the society also includes clergy. In 2010, Pedro Salinas, a journalist and a former Sodalicio member, accused Mr Figari of physical, psychological and sexual abuse. In late 2010, Mr Figari resigned as superior of Sodalicio "for health reasons" and was sent to Rome. In 2015, Mr Salinas published a book that included testimonies of abuse by senior figures in Sodalicio. It was only at this point  the new leadership of Sodalicio admitted the allegations against the founder were "plausible" and made a public apology. Sodalicio have currently recognised 66 victims and set aside a fund of nearly $NZ4million  for reparations.The events are now beyond the statute of limitations for criminal prosecution, but the Vatican’s investigation was expected to lead to severe church sanctions against Mr Figari, in keeping with the church’s public declarations on taking sexual abuses seriously.

The congregation’s letter describes Mr Figari’s behaviour as a serious sin, but then minimises its severity by addressing it as violating the sixth of the Ten Commandments (on adultery) rather than identifying the problem clearly as sexual abuse. It acknowledges  there is certainty  Mr Figari was responsible in at least one case in 1974 for sexual abuse with a child under the age of 16. However, it claims  it could not be sure with "moral certainty" that other examples involved violence.

The case is complicated because Mr Figari is a layman not a priest, but the letter leaves a lot of questions unanswered about what the Vatican has learnt in the last two decades on how to handle sexual abuse claims.

A serious failure in the congregation’s investigation was that it did not look at the testimonies in the Salinas book or listen directly to the victims.

During 2016, the Centre for Theology and Public Issues at the University of Otago interviewed a small group of male victims who experienced physical, psychological and sexual abuses by leaders of Sodalicio.

The men are now middle-aged and the abuses happened when they were teenagers and young men. However, it is clear  the abuse had a profound impact on their lives. The feeling of betrayal was particularly damaging to their sense of trust and future friendships.

Listening to testimonies like this is not easy reading, and is not appropriate for younger readers. Nonetheless, it is essential  those who were subjected to abuses have an opportunity to say what happened, and it is important for the wider church to hear this. Their voices help to show the human impacts they experienced. The Royal Commission and the Truth, Justice and Healing Council in Australia seem to be a long way ahead of the Vatican Congregation in making sure these voices are heard and taken seriously. [The report on Sodalicio by Rocio Figueroa  and David Tombs is available as "Listening to Male Survivors of Sexual Abuse" at http://www.otago.ac.nz/ctpi/projects. (Reader discretion is advised).]

take compensation out and there would be less complaints. or bring limitations in like the US. has in some states. or this will never end.