Criminals use guns with relative impunity 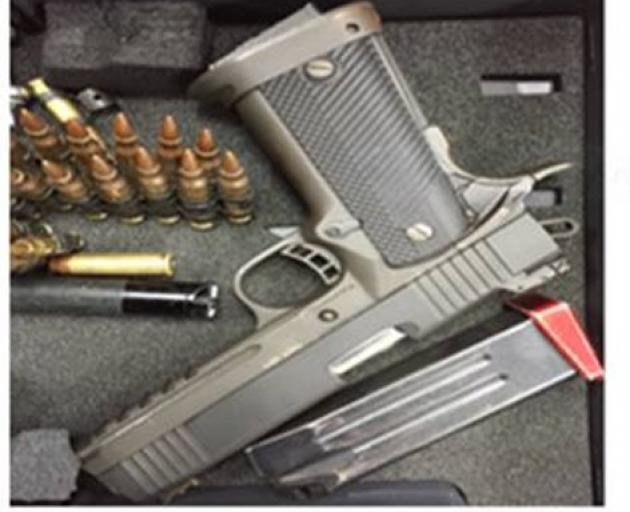 One of the guns taken in a Dunedin burglary in 2016. Photo: NZ Police
Gangsters with guns can get the message or the time, writes  Mike Loder.

The greatest lie of the gun control debate is that there is any debate at all. All the facts are in. We are now left to choose reality or agenda.

We know that literally 99% of the nation's firearm offences are committed by those without a firearm licence. Yet entire media reports on the issue don't mention these criminals once.

New Zealand has very low gun crime. This has remained consistently low - over decades - despite significant population increases. But the main source of the problem that we do have is recidivism.

Fully 9% of our gang members have been charged with five or more firearm offences. All this adds up to one truth, our gangsters have no fear of using guns.

Our worst gun theft was perpetrated by an offender serving a non-custodial sentence for their LAST firearm crime. Only 8% of gun thieves will be caught by police. And police refuse to treat gun thefts with any more priority than a stolen toaster.

They refuse to even attend 12% of scenes. Or do so days late, often ''attending'' by phone! Then the cascade of failure continues. If a gun thief is prosecuted, they can expect a pitiful punishment. If they are unlucky, they will be fined less than the value of the stolen gun.

If by some miracle they get actual prison time, less than 10% will serve a day because of concurrent sentencing. Some will even be rewarded for having illegal guns, trading them for time off their drug sentence.

The answer is simple. Make the theft and use of firearms in any serious crime an automatic aggravating factor. A judge did just that recently in a judgement against an offender with an illegal assault rifle.

That was in response to the accused not learning from the chance that a previous judge had given him with a non-custodial sentence for a sawn-off shotgun.

Around the same time, another gang member received home detention for shooting up a house, while his associate shot the victim inside.

Others have received community service for illegal possession of an armoury that included an AK47.

Yet people still ask where the problem may be?

They suggest that bigger safes may be the answer - even as gangsters storm our homes and demand these are opened at knifepoint.

The problem here is clear. A tiny number of recidivist criminals. So why won't the police union address the issue? Its president told me it is because ''the Labour Party won't go for it''.

So it attacks the lawful 250,000 vetted shooters instead of fewer than 2000 vicious criminals.

This extremist union made a telling submission to the Law and Order committee that was considering how to stop criminals from getting guns. It didn't mention punishing criminals ONCE, in a 57-point submission running to 19 pages.

It did propose dawn raids to ''check'' lawful shooters, granting us fewer rights than convicted gang members. It also called for shooters to lose the ability to seek judicial review of police abuses.

Criminals will always have access to firearms. They will smuggle, modify, manufacture, steal. But whether they choose to use them is up to us. Let's say ''No more'' in the only language that works. Prison time.

-Mike Loder is an Auckland-based campaigner for stronger sentencing of armed offenders. He has been researching ''international gun control systems'' for 25 years.

An excellent, well written summary of the facts.
A refreshing change from the usual hysterical nonsense written by gun control fanatics, who continually attack the lawful firearms owners.

Lawful ownership is not always congruent with lawful use.

In the scheme of things, "fanatics" carry weapons. Gun control advocates do not.

Many persons have been killed by police with guns./

The Labour Party won't go for it? Ask them. Then ask the National. Vote accordingly.

Don't know about Auckland, but gunmen have intentionally killed people here. One, no licence, raided a friend's armoury.

Very interesting article. Thank you ODT for publishing a refreshing and truthful incite to the real problem. Our government not being interested in prosecution of non licensed offending.

Well written article Mike Loder, and good on ODT for finally publishing a story from our side, that of the relatively silent NZ licenced firearm owners, vetted and approved by the police themselves as 'fit & proper' persons to own firearms, but seemingly under constant pressure by Police Union and anti-gun lobbies.
Mike is quite correct, we are not the problem and never have been. The facts are very clear. Overwhelmingly, licenced shooters have a huge desire to see unlawful use & posession attract serious prison time, additional time, NOT concurrent! We have no wish for scumbags and THEIR crime statistics to hobble our legitimate sport/leisure/hunting/livelihood! Its very clear: guns are not a problem, criminals are. If guns were a problem, why do the Police use them?

Potocki d' Anti Nazi Resistance - Labour is very clear, they want to empty our prisons. We spoke with National's Paula Bennett about weak sentencing and she was very receptive, although sadly too close to the election to effect any change. But worry not:
I WILL be voting accordingly.