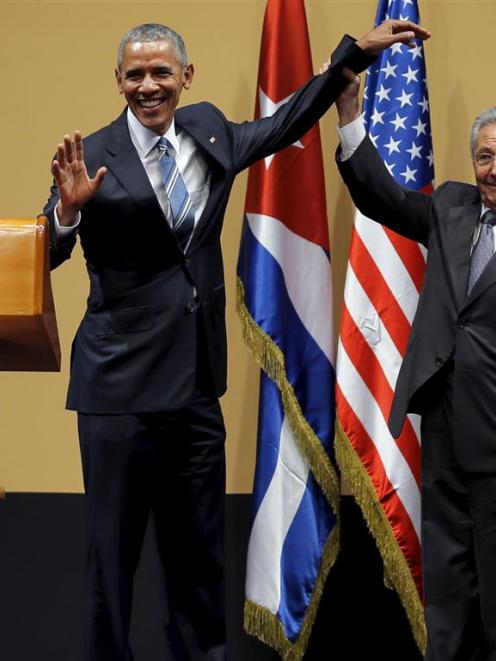 United States President Barack Obama and Cuban President Raul Castro gesture after a news conference yesterday as part of Mr Obama’s three-day visit to Cuba. Photo from Reuters.
A British journalist compared the huge American delegation (800-1200 people) that is accompanying President Barack Obama on his first visit to Havana to Japanese soldiers stumbling out of the jungle to discover that the war ended a generation ago.

And the Rolling Stones, who are staging a free concert for half a million people in the Cuban capital on Friday, explained that Obama was their opening act.

The US Embassy in Havana has already reopened, but only the US Congress can end the 55-year-old American trade embargo against Cuba.

Under Republican control, Congress is not going to do that, so this visit is really just a social call.

Indeed, it was scheduled to coincide with spring break in US schools so the Obamas could bring their daughters along.

Yet no journalist watching all this can resist speculating about whether this opening portends great political changes in Cuba, maybe even the eventual end of the long dictatorship of the Castro brothers and the Cuban Communist Party.

Least of all me, as I have been speculating about that in public, at intervals, for most of my adult life.

I never went to Cuba during the ‘‘heroic'' years when the leadership lived in permanent fear of American invasion or subversion, and most Cubans really were ready to fight to defend the revolution.

My first visit was in the mid-1980s, when the bloom was already off the revolutionary rose.

Most of Latin America was living under brutal US-backed military dictatorships at the time, and the Cuban dictatorship seemed to me almost gentle by comparison. It didn't even kill people much.

But Cubans, unable to travel and aware that the regime's propaganda usually lied, were in a stroppy mood. If you spoke even a little Spanish, they unloaded their discontent on you.

So I went home and predicted that the regime, if not on its last legs, was at least in its last decade. This did not come to pass on schedule, but when I next went to Cuba, in 1994, it certainly looked imminent.

The collapse of the old Soviet Union had cut off all the subsidies that had kept the Cuban economy afloat, despite the American embargo and its own huge inefficiencies.

During the ‘‘Special Period in Time of Peace'', which lasted through most of the 1990s, nobody starved, but almost everybody went hungry and the average Cuban lost 9kg in body weight.

Social order broke down, crime was rampant and desperate young people openly sold their bodies in the streets.

I brought my wife's parents with me on one of these visits, and my mother-in-law was mugged in central Havana twice in a week.

On the second occasion, my father-in-law was injured while resisting the muggers, and I had to bribe a police inspector $US100 to free him from the police station where he was being held - technically as a witness, but really for ransom - so that I could get him proper medical attention.

So I went home and predicted the imminent collapse of the regime again. Communist regimes in Europe whose people were quite well-fed had been falling to non-violent democratic revolutions with scarcely any resistance in the past few years, so it seemed implausible that this ageing, ramshackle dictatorship would last much longer either.

Wrong again. But when Fidel Castro retired after 42 years and handed power to his brother Raul in 2008, Western embassies in Havana (minus the United States, of course) arranged for various ‘‘experts'' from their countries to visit Cuba and explain how things were done in a real democracy - which they fully expected that Cuba would shortly become.

I was asked to go along as an alleged expert in media and civil-military affairs, to tell Cuban journalists and military officers how they should operate in a democracy. It was a well-meant but ridiculous initiative, but I went anyway because it gave me unprecedented access at a very interesting time.

And I came back convinced once again that a democratic transformation was really imminent, because most of those I was speaking to expected it themselves. Few of them, even in the armed forces, feared for their jobs, and most of them thought that change would be for the better.

But fast forward another eight years, and very little has changed. Raul Castro says he will retire in 2018 (when he will be only 86), but a new generation of Communist leaders is already being promoted into key positions.

Up to three million American visitors a year are expected now that the US ban on travel to Cuba has been lifted, which will widen the economic gulf between Cubans with access to dollars and those without, but it is unlikely to trigger a revolution.

The surge of incoming money will magnify corruption at every level of the regime, but that won't cause its overthrow either.

In fact, I now think that the regime will probably survive until and unless the US Congress finally ends the embargo and exposes Cuba to the full force of international capitalism. Of course, I have been wrong in the past.